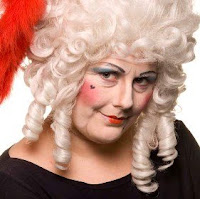 SOME of you men seem just that little bit too quick to leap into women's clothes, if you ask me.
Carnival time? Oo, let me dress as a St Trinian's girl in school uniform with stockings and suspenders.
Panto time? Let me be the dame with big bosoms.
Fancy dress? No, I don't want to be Superman, I want to be Wonder Woman.
To be fair to men (I can hear the dearly beloved choking on his cornflakes. 'That must be a first,' be mutters), women, too, sometimes dress as the weaker sex (men). Look at Kate on The Apprentice in her suits, shirts and ties. But that's different. That masculine dress only serves to accentuate her femininity - all long blonde hair, make-up and shiny teeth.
Now it's fine if you're a transvestite. Variety is what makes this world an endlessly fascinating place, but no self-respecting transvestite would go out in public in his wife's wig she bought in a Woolworth's sale in 1976. He wouldn't dream of stuffing two great pillows up his jumper and think anyone would believe they were heaving bosoms. And he certainly knows better than to plaster on lipstick a la Bette Davies in What Ever Happened to Baby Jane?.
I must admit there is a tad hint of jealousy in this rant of mine. It's just not fair that most men in heels have better legs than mine (heck, a piano has better legs than mine) but these "fancy dress" men look exactly what they are, a man in a frock.
Would you have been fooled by Tony Curtis and Jack Lemmon in Some Like It Hot? Me neither. Men in frocks. Nathan Lane in The Birdcage? Man in a frock. Dustin Hoffman in Tootsie? Man in a frock. Eddie Murphy in just about every film he's made? Man in a frock. Eric Idle and Robbie Coltrane in Nuns On The Run? Men in nuns' habits.
The only exception, strangely, seems to be Dame Edna Everage. Lots of people believe she's a real woman and, let's face it, she really does look like a man in a spangly frock.
On the whole, though, you men wouldn't fool a short-sighted baboon from 100 yards. If you don't believe me, take a look at the photo below. I rest my case. 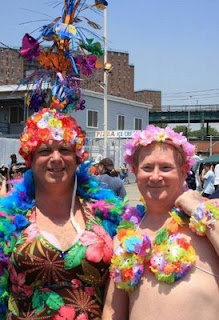