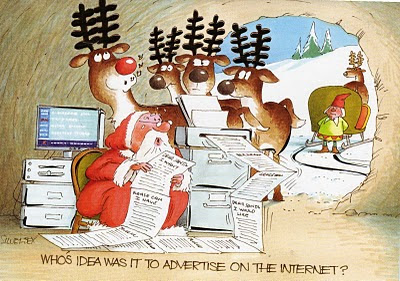 I HAVE received a £10 gift token from Tesco after pointing out a mistake on one of their Christmas cards. The card is above and I'm sure most of you will know instantly that it should be 'Whose idea' not 'Who's idea'. Not that I care whether any of you spotted it or not - not everyone is good at spelling and/or grammar. That's not the point. The point is .... well, I'll let you read the letter I wrote to Tesco to see exactly what my point is.

Let me say before I start that I love Tesco. I sit here writing this wearing a pair of nifty socks (4 pairs for £3 – an absolute bargain) I bought in Tesco while drinking coffee I bought in Tesco out of a mug I bought in Tesco. This morning I will be doing my weekly shop in Tesco before going to work and I freely admit I’m a grumpy old woman who has seen better days.

However, take a look at the enclosed Christmas card which falls far below Tesco’s normally high standards. I don’t suppose my nephews and nieces, for whom the cards were intended, would have been overly concerned with the appallingly ungrammatical caption as long as I hadn’t forgotten to enclose their crisp Christmas  £10 note but that’s not the point.

I’ll leave aside the fact that as far as side-splitting cartoons go this was about as funny as Jonathan Ross and Russell Brand throwing a surprise party for Andrew Sachs and turn my attention to that caption.

This is not some arcane grammatical point. This is very basic grammar. I personally would be hard-pushed to define a modal auxiliary verb or a pluperfect subjunctive and, if you want to be picky, I’m sure you’ll find errors in this letter, but I was taught at primary school the difference between who’s and whose.

The purpose of grammar is to guide the reader smoothly through the piece. Having to read this three times to get the gist of it turned what could have been a mildly amusing (if you had drunk enough red wine, 3 bottles for £10 in Tesco) caption into a blood pressure-raising abomination.

What I find worrying is not that some caption-writer has made a mistake - we all have bad days and blind spots - but the number of people this error must have passed by.

I can just imagine some young graphic designer straight out of a second-rate poly-turned-university proudly displaying his ‘hilarious’ cartoon to his mates who all agree it’s quite the funniest thing since that YouTube clip of a tap-dancing penguin. It then goes to a supervisor who nods approvingly and is then, presumably, authorised by someone in Tesco, as the back of the card proudly reveals, “Designed exclusively for Tesco Stores Ltd” – something I personally would have wanted to keep under wraps. Back it goes to be printed, proofread and packed into boxes.

I suspect you think I’m a pedantic and boring old fart but I am genuinely concerned that a firm of Tesco’s standing could allow this to be printed in their name.

I love my nephews and nieces dearly but I want them to get a decent education and not believe that it’s okay to be totally slapdash with the English language. I don’t want them growing up fit only to stand in a dole queue with their dog on a string behind a man who smells of wee.

Although I suppose they could always get a job writing greetings cards for Tesco.