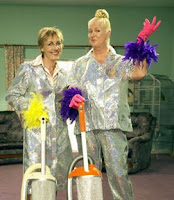 PROCRASTINATION is a probably a crap title for a blog posting if you want lots of visitors to your site.
I found this out while surfing other people's blogs. www.allthingswomanly.blogspot.com/ had tried an experiment by calling her postings things like "pussies" and "tits" and had had many more visitors than usual.
She did, to be fair, include a picture of cats and two beautiful blue tits, which I'm sure was a powerful comfort to watery-eyed men using Google search to try to find a pneumatic lass with whom to share their oh so lonely nights.
But I'm going to leave "procrastination" as my title because, well, wittering on about blue tits stops me from having to write about what I really intended to write about which was…. what was it? ….. procrastination.
I am an arch procrastinator. Faced with a kitchen which will require an industrial-strength vacuum and a couple gallons of bleach to clear up the detritus of last night's supper, I turn on my computer and start looking at other people's blogs.
However, if I think it's about time I tried to dredge up another oh-so-witty posting (no comments required, dear readers) from the liquefied gloop that passes for my brain these days, I start wiping down worktops and turn into Kim from TV's Kim and Aggie fame. For those of you who don't know, Kim and Aggie visit people whose houses are so filthy they make mine on a bad day look like something out of Ideal Homes.
They then proceed to harangue them about housework and scare them witless by collecting germs and bacteria and breeding them on petrie dishes. Aggie (who's Scottish) will then say something like, "Och aye the noo [I might be exaggerating the accent slightly], behind your cooker you have Slutticow bacteria and Black Death viruses." BEHIND the cooker? I never even knew my cooker had a behind.
Kim is definitely the scariest of the two, having piled-up brassy hair, high heels, and feather-trimmed Marigolds.
Anyway, that's by-the-by. What I really wanted to talk about was procrastination. But do you know what? I can't be bothered. It's 9am on a Sunday morning and I'm going to make a lovely pot of proper coffee and have some toast and marmalade. This marmalade was made by my friend Sally, and it's the most delicious marmalade you've ever tasted - full of really chunky bits of peel and nutty bits.
Later I will get to grips with the housework. That's when I've finished my book. And didn't one of my friends lend me this month's Marie Claire? It's a lovely day; I might go for a walk. Time I phoned my mother too ..............................................................................
at April 29, 2007