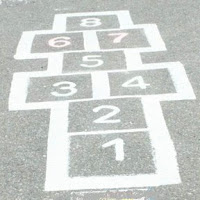 I HAVE been tagged. Twice. I'm such a blog ignoramus that I had to do a Google search to find out what this meant. Wikipedia tells me it's a bit like a game of tag. Someone writes a list (e.g. Five Things You Love About Posh and Becks) and then tags some more people to write their list. I'm honoured and am in the process of thinking about what to write. I'll do it soon.
This tag business got me thinking about childhood games.
I lived on a farm in the middle of nowhere as a child and went to the village school where our pleasures were simple - putting teachers in wicker men and burning them alive, running around forests with stags' antlers on our head and sacrificing the runt of the litter (he was called Mervyn) to the goddess of the moon. The usual innocent pagan rituals.
One game was called "freeze" where everyone would leap and dance about until the "it" child yelled: "Freeze!", like some American cop, at the top of its little lungs and everyone would have to freeze in the position they were in. The first one to move was the next "it". My friends and I one day persuaded Mervyn (before he was sacrificed, obviously) that you also had to close your eyes when you froze. He was the one who smelled of pee. Why does every junior class have a child who smells of pee? Mervyn froze in a fairly stable position and we horrid, horrid children - yes, you've guessed it - crept away leaving him frozen in his urine-infused aura.
We played playground games like blindman's bluff and hopscotch. It was all a far cry of what goes on in today's playgrounds where - if you read the tabloids - they play games like Spot the Drug Dealer (he's the 12-year-old with the sunglasses and bulging pockets), Mug The Old Lady, Catwalk Queen (you're not allowed to play unless you're a Size Zero-Zero), Hide and Seek (hide from the child who's forgotten to take his Ritalin) and Reality TV Star (you're not allowed to play unless you have an air of desperation and an IQ below 80).
But each generation faces its own dangers. When we went to birthday parties there were games like musical chairs, pin the tail on the donkey and pass the parcel - except when the kids came to my house. My mother couldn't be bothered with all that rubbish and would send us out to play.
A health and safety inspector would have had a fit as we climbed over the farmyard machinery with its spikes and blades honed to razor sharpness, clambered to the top of precarious piles of straw bales and made dens in animal pens that no doubt harboured virulent strains of e-coli, salmonella and brucellosis. I'll say one thing for my mother, though, she might have subjected us to the risk of amputation, suffocation and respiratory failure but she did produce a very fine birthday tea.
All that talk of birthday parties has made me hanker after some party food. I'm off to make some jelly and custard and tiny sausage rolls the size of Mick Jagger's todger (very small, according to ex-super model Janice Dickinson).