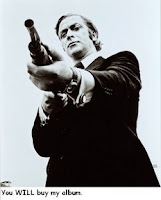 I MUST admit to being surprised when I read that Michael Caine was releasing an album. I didn't remember him singing School's Out Forever while educating Rita or Que Sera Sera while driving minis down steps in Italy or Nkosi Sekelel' iAfrika while being speared by Zulus.

Then I realised he wasn't actually singing on this album. He wasn't even making a pretence of singing by moving his lips in the back row of the chorus. All he was doing was compiling a few "chill-out" songs.

Good grief. I can do that. Does anyone want to buy my collection of songs gleaned from the 550 CDs I got free with the Sunday papers? Lots of these CDs have "Gold" or "Golden" in the title - words, when it comes to albums, is pretty much interchangeable with "Crap".

A quick search in the pile has revealed Christmas Gold: 10 Festive Tracks. Could just as easily have been called Christmas Crap: 10 Festive Tracks. It includes Rudolph The Red Nosed Reindeer by Gene Autry, I Saw Mommy Kissing Santa Claus by the Beverly Sisters, God Rest Ye Merry Gentlemen by Bing Crosby, and - I'm not joking; I wish I were - Leave It Alone by someone called Peas and Karrots.


Then there's a compilation of blues songs called something like My Dog's Fallen Down A Well and My Kids Died While Trying To Rescue Him And Now My Wife's Left Me For The One-Eyed Milkman Blues, if anyone wants cheering up.


Back to Michael Caine. One report I read had this wonderful quote: "It wasn't until he wowed Elton John with his knowledge of downtempo ambient music that he realised he was a chill-out expert. " Downtempo ambient music! I nearly broke my CD of bird calls, Songs For Singing Plovers, I was laughing so much.

Sir Mike was, apparently, having dinner with Sir Elt in the South of France when, like Saul on the road to Damascus, he saw a blinding light of inspiration. Like Saul, who from then on was called Paul, Sir Mike The Mummer suddenly became Sir Mike The Mixmaster.

At least his album doesn't have Gold in the title, although I suspect it should. It's called Cained, which, if you think about it, with its overtones of getting hammered, is a ridiculous title for a load of "downtempo ambient music", even if it is a pun on his name.

Cained is described as "a selection of his favourite mellow tracks", "mellow" being another album word which could so easily be replaced by "crap".

In the meantime, if anyone wants to buy my compilation CD called Gold Songs By Mellow Crooners, send me £12.99 and I'll get it to you in a plain brown wrapper.
at August 10, 2007