Things That Have Annoyed Me This Week


SEVERAL of my Facebook  friends have been doing that exercise where you count three blessings a day for five days. It doesn't hurt to sit down and realise how blessed  you are. I know how lucky I am to have a great man (even if he's not perfect, see below), brilliant family (if slightly barking) and lovely work colleagues (slightly barking too). And I'm healthy (mostly), wealthy (compared to 90% of the world, if not to Bill Gates) and wise (yes, I did say, wise).

However...sometimes petty annoyances jump up and bite me on the bum.

Things that have annoyed me this week:

1 The dearly beloved is, as I may have mentioned before, the untidiest man in the world. People don't quite believe me when I try to explain just how untidy he is. But now I have proof. I bought a nice big box of PG Tips which I should have put in the larder immediately but foolishly left on the worktop. When I got home he had opened the box. A normal person would have removed the cellophane and run their thumb along the perforations to make a nice flap which you could close again. But not the DB, oh no. This is how the box looked when he'd finished with it. 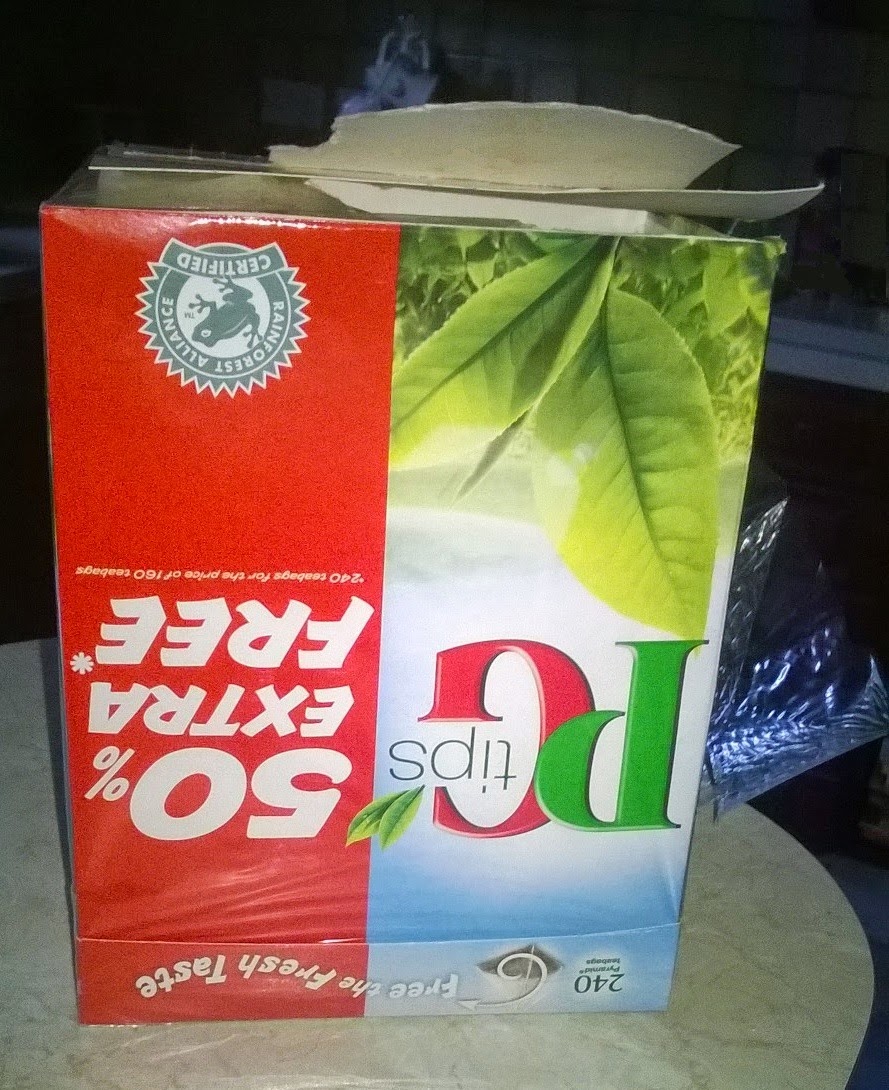 I rest my case.

2 My annoyances seem to be of my own making because, secondly, I stupidly filled in a Conservative party online questionnaire. I thought I may as well make my views known on a variety of subjects, more in hope than expectation.  But since then I have been inundated with emails from Grant Shapps, Philip Hammond, Iain Duncan Smith, Esther McVey and Boris Johnson all seeking my support on a variety of Tory policies. GO AWAY AND LEAVE ME ALONE.

3 I had to phone the Inland Revenue this week about my tax code. After all that "press 1 for this, press 2 for that malarkey,  I was put on hold on a loop  - music, message ("thank you for waiting, one of our advisors will be with you as soon as possible"), music, message, music, message, music, message for what seemed like an eternity. I'm using the word "music" quite loosely. Its plinky plonkiness was so abysmal that I wanted to tear my ears off and transplant them on to a mouse.  Must admit, though, when I finally got through, it was fine with my query dealt with efficiently and quickly.

4 Even though my drive to work is along an A road, it is winding and rural with very few places where it is safe to overtake. I'm fairly patient behind farm vehicles because I know they will soon turn off  but this week I got stuck behind an old Ford Escort. My heart sinks whenever I arrive behind a car and all you can see are  two fluffy white  heads barely peeking above the seats. It's a tricky road and you have to be careful BUT THAT'S NO REASON TO DRIVE AT 20mph AROUND THE BENDS AND BARELY SPEED UP ALONG THE STRAIGHTISH BITS. Then, blow me down, when they finally reached a stretch of road where it was possible to overtake, the driver suddenly found his accelerator and hared along at the rate of knots, before braking violently and taking the next bend at 20mph.

There are several other annoyances I could mention, but I'll leave those for another day.

Goodbye, and don't forget to count your blessings.

Email ThisBlogThis!Share to TwitterShare to FacebookShare to Pinterest
Labels: Inland Revenue, PG Tips, Things That Have Annoyed Me This Week, Tory party