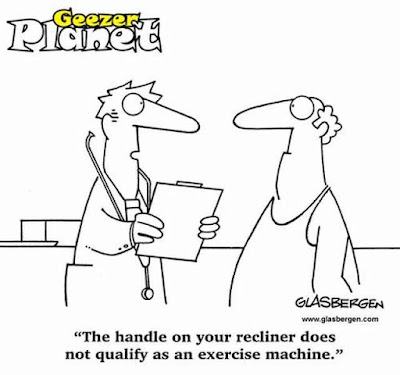 My older sister Peggy (aged 75) is fit as a butcher's dog. In fact, so fit is she that she represents Great Britain for her age group in triathlon. She's off to Australia this week to take part in the world championships.

So my thoughts have turned to getting fit. It's just a question of eating fewer calories than I burn - what could be easier...?

In my quest for bodily perfection - or at least the desire not to be winched out of a bedroom window by a crane when I die - I trawled the internet for hints and inspiration and came across a website called 24 Fun And Exciting Ways To Lose Weight!. The exclamation mark is theirs, not mine. My 30-plus years working on newspapers gave me a horror of exclamation marks - unless they actually do punctuate an exclamation. Various editors have referred to them as screamers, gaspers, shriekers and a dog's cock. Not sure of that last one, but there it is.

I digress - anything rather than address the issue at hand…which is losing weight and getting fit.

I think the target audience of this website is people considerably younger than I.  For the 25 tips include hula hooping and playing with a Frisbee.  You won't catch me out in the park flinging a Frisbee about. The young people in my family find me embarrassing enough without throwing a plastic disc at me and watching it fly past my head as I flap my hands and try to catch it.  I briefly considered hula hooping but was afraid I wouldn't be able to find one big enough to fit round me. Difficult to hula-hoop with something resembling a snug belt.

Some of the suggestions sounded quite racy to an old woman like me. "Try twerking," I was advised.  These thrusting, suggestive moves were made popular by a young songstress called Miley Cyrus. Well, Miley, they may look sexy when you do them. When I try I look like I’m at the local fair with a ferret down my trousers. Strip aerobics was another one.  The idea is to learn moves similar to a striptease and get fit while doing it but not, praise be, strip completely in class. Well, that's a relief - and a bigger relief, I'm sure, to my potential classmates.  I discounted pole dancing and belly dancing for similar reasons.

There was one suggestion that proudly proclaimed "age no bar!" (again, their exclamation mark, not mine). It's something called Bokwa which, I was told, is popular with Robbie Williams, another  popular singer, I believe.  It requires using your feet to draw letters or numbers while doing "cardio to music". I can think of a few words I could draw but probably not suitable to repeat them here.

I’m in two minds about whether to “say hello to cycle karaoke!" (again, their exclamation mark). The concept is that singing is an indicator of your heart rate and the aim, as far as I could ascertain, is to sound like you’re on 60-a-day and have just run a marathon. If you don’t, you are not working hard enough.

Bizarrely, it suggests you do this in the gym so if you find yourself next to a seemingly mad woman on a static bike belting out hits from the musicals, it'll be me trying keeping fit. No need to call the men in white coats.

On second thoughts, I think I might revert to my original idea and just try to eat less and move more. I have  a wonderful extractor/blender that makes lovely smoothies, soups and dips so I can get lots of fruit and vegetables down me and I have started walking more.

The better half told the pub the other night: "The woman's on a diet and she's lost 100 pounds." Everyone looked suitably impressed until he added: "That's what she spent on some kitchen gadget for her vegetables.”

He'd better watch out or bits of him will be in it.