The Secret Of Happiness 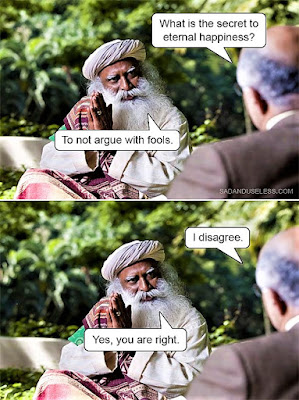 You may not have noticed it but at the top of this blog is my motto: The secret of happiness: be nice and have a laugh.

I am a firm believer in that. It goes on to say: "and in the words of Miss Piggy, never eat more than you can lift". But that's another story, we'll ignore that for now.

The vitriol that passes for reasoned argument these days is frightening. Some of the trolls on social media are vicious, cruel and often, it seems, mentally certifiable. What happened to the phrase "agree to disagree"? I live with a man who has strong views on just about everything, from climate change and Brexit to how Manchester United will fare under manager Ole Gunnar Solskjaer. But he likes to be challenged, to hear the other point of view, to have a reasoned discussion.

I have worked with people from all walks of life and many of them are my Facebook friends. They have differing views on politics and global issues. Unfortunately, a few of them will not tolerate a difference of opinion. Occasionally they "unfriend" people who disagree with them. I've got to a stage where I refuse to engage. I won't comment on political posts. Maybe it's cowardice on my part but it makes for a much more peaceful life.

So what made me write this post? I happened across the following Mark Twain excerpt from his Letters from the Earth: Uncensored Writings. It really struck a chord with me.

“Man is the Reasoning Animal. Such is the claim. I think it is open to dispute. Indeed, my experiments have proven to me that he is the Unreasoning Animal... In truth, man is incurably foolish. Simple things which other animals easily learn, he is incapable of learning. Among my experiments was this. In an hour I taught a cat and a dog to be friends. I put them in a cage. In another hour I taught them to be friends with a rabbit. In the course of two days I was able to add a fox, a goose, a squirrel and some doves. Finally a monkey. They lived together in peace; even affectionately.

Next, in another cage I confined an Irish Catholic from Tipperary, and as soon as he seemed tame I added a Scotch Presbyterian from Aberdeen. Next a Turk from Constantinople; a Greek Christian from Crete; an Armenian; a Methodist from the wilds of Arkansas; a Buddhist from China; a Brahman from Benares. Finally, a Salvation Army Colonel from Wapping. Then I stayed away for two whole days. When I came back to note results, the cage of Higher Animals was all right, but in the other there was but a chaos of gory odds and ends of turbans and fezzes and plaids and bones and flesh--not a specimen left alive. These Reasoning Animals had disagreed on a theological detail and carried the matter to a Higher Court.”