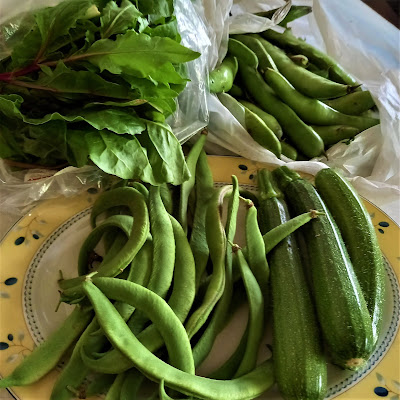 THINGS I have been given in the last fortnight: a home-made Victoria sponge, rump steak, two plates of fish pie, four venison burgers, a selection of sea-caught fish, a delicious home-made catalan-style sauce and all the vegetables in the picture.

I am very grateful for all this, even though there is a risk that when I die they will have to winch me out of my bedroom window by crane while being filmed by the BBC.

The donors were various family members and my next door neighbour, not, as you might think, because I am a hopeless cook and they fear my better half will develop rickets and scurvy under my culinary inadequacies, but because they are generous people - okay, and also because they think there is a slight risk of some kind of vitamin deficiency.

It's the time of year, too, where my gardening siblings take pity on (or rather, mock) my lack of greenfingers and pull the occasional radish to show me what bounties Mother Nature will bestow if you only accord her a little respect.

I have managed to give them a slight shock, though. My brother gave me a cherry tomato plant already growing vigorously in its tub AND I HAVE KEPT IT ALIVE. It even has some small green tomatoes on it, ready to ripen in the sun if only I can keep up the vigilant slug assassination and regular watering. I have also managed to grow some lettuces and beetroot - yes, all on my own.

Oh how my sisters laughed at the garden centre when I bought the seeds. They were both round my house yesterday, staring in disbelief at the sturdy little leaves while I smiled smugly. I just hope pride doesn't come before a fall.

[Apologies to some of my regular readers who might be getting a slight feeling of déjà vu with some of my posts. I have started going through this website and deleting some hideously out of date posts and updating others.]