My (Brief) Life As A Chicken Farmer 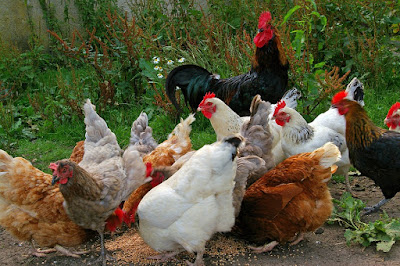 I recently had a 10-week freelance gig editing two magazines called Country Smallholding  and Your Chickens . I was brought up on a farm so it wasn't exactly a foreign language to me - although terms like coccidiosis and chalazae had me reaching for the dictionary.
We always had chickens, bantams and guinea fowl running about when I was a child - all so free range that you'd occasionally come across a nest in a hedge containing clutch of eggs. And then there was the time I looked after my sister's chickens while she was away in Turkey. 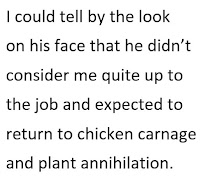 I wasn't worried - expert chicken farmer that I was (in my own head). I was more concerned about keeping some plants alive in her polytunnel, what with my propensity for killing anything green as soon as I look at it.
I wasn’t upset that I was most definitely second choice for this task. Her son was supposed to be on chicken duty but he had been called away to work on Guernsey – a bit far to pop back to chuck a bit of corn about. He gave me very detailed instructions about how to care for the chickens, a cockerel and one broody hen and how to water plants without over-watering when the soil began to feel dry.
I could tell by the look on his face that he didn’t consider me quite up to the job and expected to return to chicken carnage and plant annihilation.
So there I was, wellies at the ready, a chicken farmer and horticulturist by default. Days one, two, three and four went swimmingly. No sudden deaths, plants still green(ish), eggs being laid – all was well with the world. What could be easier than making sure a few chickens had food and water?
By day five I had become complacent and was even enjoying my brief stint as a hoary-handed daughter of the soil. Then it all went horribly wrong. I had been filling up the water-bowls near the fence but then I spotted another bowl further away and thought I would fill that one up as well.
The chickens were interested and started to gather around, clucking contentedly as happy chickens do. They had been drinking from here quite a lot and it had been raining so the area around the bowl was a bit messy.
The next thing I knew I was slipping on the mud, arms flapping like a demented overgrown Buff Orpington; then flat on my back, chickens squawking and scattering in all directions...except for one big protective cockerel who stood staring at me with a baleful glare in his eye. I took one look at his razor-sharp beak and his air of evil intent and, I admit, might have overreacted a tad. Moving quicker than I have in 30 years, I leapt back onto my feet and ran as fast as my little short fat legs would carry me. Outside the pen I saw Cocky Scissor-Beak strutting away. I swear he was shaking his feathered head in bemused despair.
I was covered in mud and chicken shit, my only consolation some free range eggs for my breakfast.
Oh, and a couple of the plants had started to look a bit iffy too.
And what do those terms mean?
What a column, hey, entertaining AND educational!