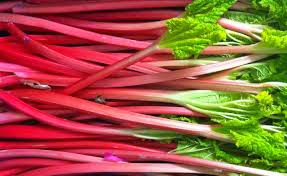 Today I have been talking rhubarb.

I don't mean I was a film extra pretending to chatter away in the background - but I was discussing that love-it-or-hate-it garden staple with my neighbour.

I was reminded of my late mother who loved her rhubarb. It was a truth, universally acknowledged in my family, that a single woman who came knocking on my mother's door was in want of rhubarb (little literary reference there as the better-read among you will no doubt recognise).

She tried to foist sticks of rhubarb on all her unsuspecting visitors. I was wise to her tricks and refused to accept any unless it was cooked, covered with pastry or crumble and with a jug of custard beside it.

However, there was the time I succumbed to her blandishments and took home a bundle of  raw rhubarb.

Now, cooking is not my forte. In fact, anything that is at all practical and useful is not my forte. If you want a stiffly-worded letter written to a utility firm, I'm you're man, but don't ask me to look after your house plants while you're on holiday. Not unless you want to come home to plant carnage.

I was only half listening as Mother wittered on about putting some bicarb in when cooking the rhubarb to reduce the acidity - so I did.

I made a very tasty crumble and the dearly beloved devoured it. He even had second helpings and  later that day, thirds.

When my mother asked him if he had liked the rhubarb crumble he said he did - but unfortunately it seemed to have had a detrimental effect on his digestive system.

When we were alone my mother asked me how much bicarb I had put in the crumble.

She had told me to add a "pinch". What the hell is a "pinch" anyway? I can't remember exactly how much bicarb I had added but it was more than a heaped teaspoon but less than a heaped dessertspoon. That would do it, said my mother while shaking her head in despair.

The dearly beloved has now completely forgotten Rhubarbgate so don't remind him, please. All healthy relationships have their little secrets. Don't they?

Email ThisBlogThis!Share to TwitterShare to FacebookShare to Pinterest
Labels: rhubarb