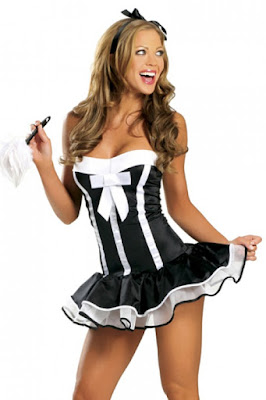 EVERY so often the rubber gloves and the feather duster come out here at Chez Disarray. Yes, I am talking about house-cleaning, not some weird sexual practice for which certain men pay good money.

The picture, by the way, is not of me, although she does bear a remarkably close resemblance to me -  apart from her age, height, weight, hair, legs and figure.

I am, unfortunately, occasionally caught by the CHAOS theory, that's the Can't Have Anyone Over Syndrome because your house is too messy. Paradoxically I hate disorder and untidiness, so when the CHAOS theory really starts to take over, I begin my assault on the mess.

It always starts the same way - an excess of energetic zeal that sees me empty every single cupboard in the kitchen onto the floor. Then I go through every item, one by one. I find a good half dozen bottles with half an inch of congealed sauce in the bottom, then there's the cereal packets with their handful of damp flakes, the jam with its blue furry coating, herbs and spices that have given up the ghost and turned grey, and ingredients for exotic (exotic being a euphemism for gut-wrenching) dishes I have only ever cooked once.

Do I really need four chipped mugs when I have three perfect sets of six, not to mention the teaset with its dozen cups and saucers? Who do I think is coming to tea - the Band of the Grenadier Guards? I wish.

Other rooms yield receipts for household appliances I can't ever remember buying. Whatever happened to the gizmo for vacuum packing left over food? Not that there was ever much call for it, most "left over food " going in the waste disposal that is my gob. The toy box (for visiting nephews and nieces) is a grim amputee ward of dolls with one arm, teddies with one eye, a couple of headless chickens and, hiding at the bottom, a knitted spider with five legs. There are books without endings, lorries without wheels and complicated games without instructions. 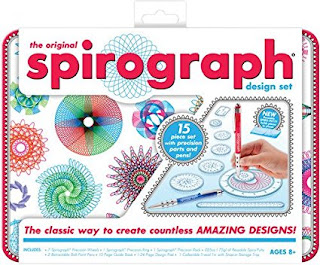 But all this pales into insignificance compared the chaos that is my attic. The dearly beloved mother's once gave me a pile of his old toys, including a Spirograph (remember them?). I tried to dump them, but he rescued them with an accusing look in his eyes. Of course, it's just a load of old tat in my eyes, priceless childhood memorabilia in his.

Hiding behind one box was, I swear, a Japanese soldier who didn't know the war was over. Kato and I have now become firm friends - he has taught me origami and ikebana and I have taught him the ancient British arts of ordering takeaway pizzas and swearing at the television.

So I've made a pledge to get myself organised, with a proper household routine. Then every day will be a Can Have Anyone Over Day. They will be especially welcome if they bring a can of spray polish and a duster.