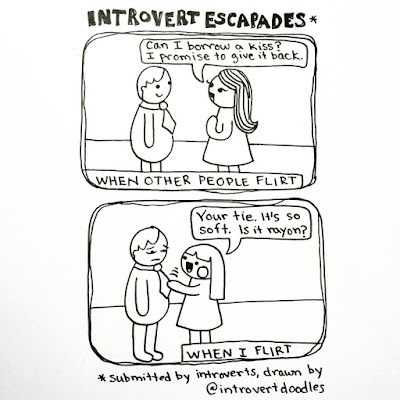 There I was lackadaisically (lackadaisical is my default setting these days) surfing the net when I came across one of those lists that proliferate. You know, the 100 Ways To Lance A Boil type of thing.

This one was 10 Flirting Tips. I don’t know why I started reading it. I'm over 60 and have been in a happy relationship for 35 years. If I flutter my eyelashes, men don't rush towards me with lustful intent but with handkerchiefs thinking I've picked up some dust in my eye while bending down to tie the laces of my sensible shoes.

This one began, "If you've ever been the subject of an accomplished flirt, you'll know how flattering it can be." I racked my brains and could just about remember a man telling me I was beautiful in 1984. I told the better half and he threatened to confiscate the man's white stick and send his dog to kennels. Oh, har-de-har.

This list promised to have me "flirting like a professional in no time". Are there professional flirters? It was never mentioned as an option by my careers adviser when I was at school. No, all the girls were advised to be nurses, teachers or secretaries. Hopefully, women's horizons have broadened somewhat since those unenlightened days back in the year dot.

Anyway, top of the list was "start a conversation". Hmm, I've got that one down. I can witter on about nothing with the best of them. So what words of wisdom do I need to impart?

"The best opening line is to say hello."

Wow! Who'd a thought... But thank God for that. I thought I was going to have to read up on Einstein's theory of relativity or compare and contrast the Scottish law system of the 18th and 21st centuries.

Then there was, "Be enthusiastic." I've tried that but it's difficult to look fascinated when a man is telling you in great detail about his collection of 1930s back scratchers or droning on about his journey around the M25. My eyes tend to glaze over and a smile like a death mask fixes itself to my face.

"Be playful," was number three. I don’t really know what that means. But I'm going to invite the next man I have my eye on to a game of darts or Monopoly. That should do it.

There was "go it alone". Sensible advice. I've known many a man run for the hills as my girlfriends and I, a little tipsy after drinking too much red wine, have approached like a pack of hyenas after a wildebeest. Others included things like "make eye contact but don't stare" although they didn't specify at what point a flirtatious look turns into a "help, is this woman a serial killer?" stare.

I must also "compliment him". That's difficult with men who are my age. What do  you say? "I notice those false teeth of yours fit very snugly" or, "The light is glinting quite fetchingly off the top of your bald head."

But the one that got me flummoxed was "use props". I'm not sure what that entails. I suppose I could go to a party carrying the head of Bottom the ass from A Midsummer Night's Dream, but is that flirting or more "steer clear of this lunatic"? I suspect the latter. Reading on, I discovered it meant wearing a distinctive piece of jewellery or carrying a foreign newspaper to get the conversation rolling.

That's kind of a relief, although I have a  feeling that if I walk into a party wearing my best party frock carrying a newspaper under my arm I might as well be wearing a placard that says, "Do not approach!"