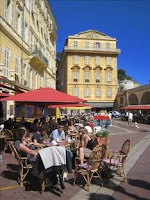 I’VE always been somewhat cynical, even as a child. I can’t, for example, ever remember believing in Father Christmas. I knew all about a big kindly man carrying a sack - but that was my dad with a bag of horse feed over his shoulder.
So when we were told, back in 2005, that relaxing the licensing laws would turn us all into continental clones, embracing cafe culture by nibbling on garlic-soaked escargots while sipping our pastis, I said: “Fiddle-les-sticks,” or words to that effect.
A glance at any tabloid newspaper will show you the effect drinking copious amounts of lager and tequila slammers has on certain Brits - and it sure doesn't encourage them to drag on a Gauloise while sitting under bistro-style stripy umbrellas on the pavement.
It’s more throwing up in the ashtray, then using the umbrellas to inflict some awful injury on the nether regions of someone who is, like them, wearing Union Jack underpants but is wearing a football shirt of a rival team.
After all, we already have experience of that European-style cafe culture on our frequent trips to Costa Del Vomita. And do we sip decorously on our Sangria on a Spanish promenade? Do we buggery. We start drinking ourselves into a stupor on the plane and don’t stop until we’ve marinated our livers in alcohol for two weeks. Then we stumble back to the plane, neck a few more drinks while up in the air before touching down on the grey tarmac under the grey skies of dear old Britain.
The government hoped the new laws would prevent hordes of drunken youths pouring onto the streets at 11pm every evening when the pubs kicked out. So news that lager-fuelled louts are now reeling about our streets all night long, getting into fights, trashing everything they stagger into contact with and throwing up in any handy receptacle, comes as no surprise.
Tsk, tsk. The youth of today. Why can't they be more like me? I have embraced the café culture with gusto. Now instead of sitting around the table with a nice cup of tea, my friends and I pour ourselves a large red wine, argue about anything and everything, eat too much and then stagger off home for a nice siesta.
Cheers.
at March 04, 2008