How To Cook A Cottage Pie 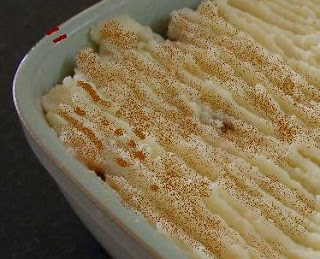 I HAVE been on a stay-at-home holiday this week while the better half has been at work. These kinds of holidays are when I try to convince myself what a good housewife I could have been if only paid employment did not intervene to whisk me off to an office five days a week.

I rather like this notion of being a domestic goddess, feather duster in hand while a beef casserole gently simmers in the oven. In my head I am the love child of Jamie Oliver and that woman off the telly who goes round people's filthy houses and in two shakes of a dog's tail has illuminated every dark nook and cranny and eliminated grime with a squirt of Dettol Anti-Bacterial Multi-Action Spray.

In reality, I am the bastard spawn of Quentin Crisp (who famously said, "There is no need to do any housework at all. After the first four years the dirt doesn't get any worse.") and Waynetta Slob.
I have managed to clear out a few cupboards and start some decorating but the Cooking Goddess seems to be taking a holiday too and has been replaced by Nigella Lawson's evil twin.

My "masterchef" nephew tells me that cooking is easy, all you have to do is follow your instincts and/or a recipe book. Trouble is, my recipe books are always full of ingredients that lie 25 miles away in a Barnstaple supermarket or lie mouldering in jars at the back of my cupboard and have to be chipped out with a spoon. And my instincts are always to slosh in more red wine, whatever I'm cooking.

The other night I decided to cook a cottage pie. What could go wrong with mince covered with mashed potato?

1. Have a frantic five minutes as you realise you have forgotten to take the minced beef out of the freezer. Then calm down and put the meat in the microwave to defrost.

2. Have a glass of wine and read a few more pages of The Mitfords: Letters Between Six Sisters. Were they or were they not, the most barking family in the universe? Unity Mitford obsessed by Hitler, sister Jessica (Decca) a Communist who married a Jew. Nancy a writer and Diana the great beauty who married fascist Oswald Mosley. Pamela who began a relationship which dared not speak its name with another woman after her marriage collapsed, and Debo, the most normal-sounding of them all, who became the Duchess of Devonshire. See how easy it is to get engrossed and miss the "ping" of the microwave?

3. Chop some onions and peel some carrots after first scraping off mysterious black bits that have appeared in the three weeks they have palely loitered in the bottom of the fridge.

4. Spray a large saucepan with special Victoria Beckham oil that's supposed to be low in calories. Start to fry the onions and carrots in the anorexic oil, decide that it's not up to the job and pour in a generous dollop of Oprah Winfrey-before-the-diet Mazola.

5. Take one wooden spoon to break up the minced meat that has clumped together under the uneven ministrations of the microwave and put into the saucepan. Remember belatedly that that this cheap mince is so fatty that even anorexic oil is a calorie too far.

6. Tip the whole lot into a colander and drain the fat into the sink. Tip the meat, onions and carrots back into the saucepan.

7. Pour in half a pint of stock made with half a stale stock cube you find stuck to the side of the cupboard after a ten minute search.

8. Peel potatoes and put on to boil. Unblock sink with sink plunger and dispose of congealed fat down the lavatory.

9. Lift up lid of saucepan and marvel at how cheap potatoes can disintegrate on the outside while staying rock hard in the centre. Continue cooking.

10. Panic when better half returns home from work and asks when dinner will be ready.
11. Put mince into a casserole dish. Drain potatoes, add butter and pulverise with a masher. Realise there are still lumps of potato like marbles threatening to buckle the masher. Get out food processor and puree potato until it resembles a thick soup, lumps now the size of frozen peas.

12. Spoon potato on top of the minced beef and place under grill to brown.

13. Go into the sitting-room and start telling the better half all about the Mitfords' father who used send them off running into the woods and would then chase them with bloodhounds.

14. Dash into the kitchen to rescue the cottage pie after the better half says, "Can I smell something burning?"

15. Hold hand under cold tap to try to take the sting out of the burn sustained while removing casserole dish with thin tea towel.

16. Warm up the contents of a tin of peas. Reheat some left over veggies from last night's dinner. Use big spoon to slop cottage pie onto plate. Add peas and serve.