Why Don't You Come Up and Fact Me? 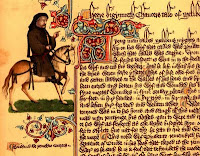 I AM aware English is an evolving language, otherwise we’d all sound like a Chaucer poem (‘swiche glarynge eyen hadde he as an hare’ or ‘his eyes were as shiny as his hair’) but I get annoyed when people take too many liberties with my mother tongue.
There is an advertisement on TV at the moment which sets my teeth on edge. Some vacuous woman is asking a car salesman to 'fact me' with information about the jalopy. Fact me? Since when was the word ‘fact’ a verb? I suppose it’s supposed to be a bit suggestive what with the 'drive sexy' slogan and F and the C in 'fact' – or is that just my dirty mind!
The ad then annoys the hell out of me even more with the phrase “yada yada” (I can hardly bring myself to type it) and its horror is compounded when the salesman pronounces 'noir' as 'nwahrr' in some strange, drawn-out transatlantic drawl. I wish the pair of them were midatlantic – several fathoms under with concrete shoes, preferably. I digress, turning nouns into verbs is what I’m talking about. I cringe when someone tells me they are going “to diary” an appointment.
Recently, task has become a verb. I’m frequently being tasked to do this or that. Tsk to task, I say. Some advertising whizz kid has come up with the slogan “the smarter way to office”. To office? "Sorry, can’t meet you for lunch, I’m officing all day." As I am officing five days a week, I get to hear quite a lot of jargon and management speak. I was once told: "We need to dialogue about that."
I wanted to scream, "DIALOGUE IS A NOUN, NOT A VERB. YOU CANNOT USE IT AS A VERB, YOU ILLITERATE, BRAIN DEAD BINT," but as I was talking to a director I just said, "What time would suit you?" Coward. I was talking about this to my friend and she told me she'd just about managed to stop herself committing filicide when her teenage daughter said to her, "You're just trying to guilt me into it." I know I'm fighting a losing battle. Several nouns are now commonly used as verbs and I'm getting used to them.
Strictly speaking, access is a noun so I shouldn't be accessing anything. Then there's 'impact' - used to be just a noun but is now a verb too. I'm trying not to get too worked up about this. It’s time for a nice sit down. I’m going to ask the dearly beloved to coffee me. Then maybe he could cake me. You never know, he might then, if I'm lucky, fact me.