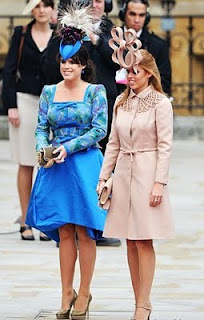 I WAS – briefly - officially designated The Saddest Person In The Family.
The accolade was bestowed upon me by my niece who popped in to see me with her dad on the day of the royal wedding. She was astonished to see that I, who previously had shown no particular Royalist tendencies, was not only glued to the television in the sitting-room but had another one switched on in the kitchen so I didn’t miss a thing as I made a pot of tea.

Sadly, the title was mine for only a day, snatched from me when my niece found out my eldest sister had two televisions switched on in the same room, one tuned to the BBC and the other to ITV.... now that really is sad!

I was pleased to get the day off work – until another niece (sorry, I’m from a HUGE family) who lives in Vienna told me that Austria had also had the day off for the wedding.

I know we’re all in the European family now, even if the UK is the family’s grumpy gran, but we have no particular links with Austria, unless you count getting bombed by her most famous son, Hitler.

I’m putting in a bid in for a bank holiday when Mrs French President Carla Bruni has her baby. Do you think we’ll get it? I think the answer will be a resounding, “Non.”

Anyway, back to that wedding.

I had no intention of watching the proceedings from beginning to end but was sucked in by the strange mixture of order and chaos, chic and tat and dignity and boorishness that accompany most weddings, whether a commoner’s or future king’s.

What a spectacle – and I’m not talking about the marching bands, the fly-pasts and the horse-drawn carriages. Some of those outfits… well.

Princesses Beatrice and Eugenie impressed with their remarkably accurate impression of the ugly sisters from Cinderella. Princess Anne accidentally wore the dining room curtains and Chelsy Davy (Prince Harry’s on-off girlfriend as I’m sure you know) looked like she’d borrowed an outfit from her slimmer sister – I know how she feels.

The Queen was resplendent in a bright yellow outfit with sensible shoes, looking slightly dumpy and dated – which is just how we like her. No vertiginous heels or Philip Treacy hats looking like boiled sweets clamped precariously on the head for Her Maj.

She dresses for practicality and comfort, spreading an aura of dependability, continuity and duty. The last thing we want is a racy octogenarian at the helm. We want someone we can rely on in a crisis, who’s not averse to getting bouquets from snotty kids and listening to interminably long speeches from boring local dignitaries without nodding off.

It was good to see Prince Philip, 90 in June, with a sparkle in his eye chatting up the bum-pacilious maid of honour Pippa Middleton on the Buckingham Palace balcony. I bet Her Maj has had some trouble with him during their 63-year marriage.

All in all it was a grand day and, whatever your views on royalty, it would only be the most curmudgeonly who wouldn't wish William and Catherine a happy marriage. 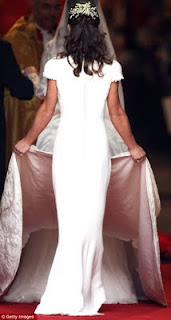 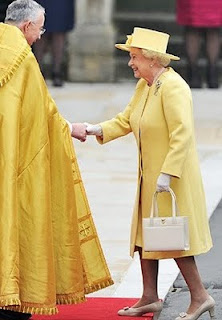