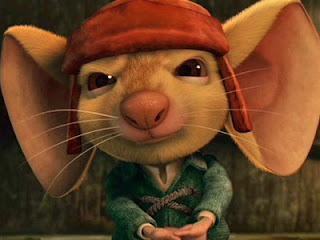 ONE of the physical traits of my family is big ears. Mercifully, this attribute has passed me by. Although my ears aren't tiny, I am not going to take off if I step out into a high wind.

My sister, however, has big-ish ears. Of course, we endlessly tease her and make "hilarious" jokes about the size of her lug-holes, when they're not really that bad. I feel a little guilty as our teasing has made her a bit self-conscious. OK, I don't feel that guilty as making fun of each other is also a family trait and she can give as good as she gets. Obviously, it's difficult to say anything bad about me as I am a perfect specimen of womanhood.

The picture is of the cartoon character Despereaux. I don't want you thinking it's a picture of my sister and wondering why we tease her about her big ears when she has an excessively hairy face and bears more than a passing resemblance to a mouse. I like the jacket and hat, though.

Anyway, sister is primarily a triathlete but occasionally takes part in marathons, half-marathons and ironman events. I am secretly in awe of her, but please don't tell her. I don't want her to have a big head as well as big ears.

She was telling us the other day about her experience in the London Marathon. It was one of the first she had done and she was running with the pack and feeling good. Those ears were flat against her head and not causing too much drag...sorry, couldn't resist.

However, among the background roar of the crowd she tuned into the occasional comment about "big ears" and at various times she heard the exhortation, "Come on, big ears!" She began to get upset and thought how unkind the London crowds were. "I'm doing my best," she thought, "There's no need to be rude."

Still, she tried not to let it get her down and continued running. Then as she slowed down to take a bit of breather, two men dressed as Noddy and Big Ears overtook her.