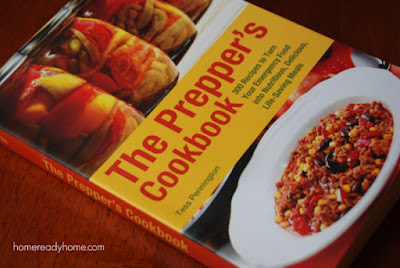 I WAS reading a post from my other blog That's Purrfect written by the genipuss Carlton Cat (I know, I know, a talking cat..... what can I say? All my cynical sensibilities fly out the window when it comes to cats.)

Anyway, it reminded me of a post I wrote for Devon Life magazine back in September. So here it is:

I HAVE been reading a lot lately about living "off grid". As far as I can see this can range from complete self-sufficiency - including sourcing your own water, growing all your own food and producing your own electricity - to living in a cottage with solar power and a vegetable garden.

The latter appeals to me. The former conjures up images of Americans living in the Appalachian Mountains wearing camouflage gear, carrying AK-47 assault rifles to keep the "danged govermint" away and with enough flour, dried beans and canned goods to last a lifetime.

In fact, I spotted a book called The Prepper's Cookbook: 300 Recipes To Turn Your Emergency Food into Nutritious, Delicious, Life-saving Meals. I'm not kidding.

In my own little corner of Devon I have dispensed with weapons, a well and a barn holding enough food to live out a meltdown in civilisation. I do, however, have room to grow some vegetables.

I have visions of a "grow your own" lifestyle - eating with the seasons, doing all my own baking, making jams and chutneys and storing my turnips in a sand barrel. If only, when he built our house, the better half had thought to include a root cellar I would be well away. No forward thinking; that's his trouble.

I'd keep chickens if I could but the deeds to our house expressly forbid it. Presumably it also precludes keeping a pig for slaughter and a cow for milk. I must look it up. If it doesn't, the neighbours are going to love me...

I am already on the way to being more self-sufficient. A couple of weeks ago I took delivery of a wormery. This, says all the blurb, is "an easy, efficient system of converting ordinary kitchen food waste into liquid feed and rich organic compost". I have set it up in the garden, added the tiger worms, and put some kitchen waste in it.

So far all that has happened is that an army of tiger worms has crawled up the sides, presumably in a vain attempt to escape, and the kitchen waste has lain there, undigested and about as far from "liquid feed and rich organic compost" as you can get.

But it's early days and all my wormery fanatic friends tell me to be patient and in a few weeks I will have so much fertiliser that I can dig up the field beside the house and grow wheat to make my own bread.  Must look out some plans for a mill.

We already have an efficient multifuel-burner which heats the water and runs the radiators. It's just a pity we don't have our own forest so we can chop down wood. The better half is a cabinet-maker, though, so we have plenty of off-cuts to burn. It’s “multi-fuel” so you can burn just about anything in it. We haven’t experimented as we don’t want to be throwing toxic fumes up into the atmosphere. We have also drawn the line at throwing in dead animals, as I have read some farmers do.

When I was child, living on a farm in the wilds of North Devon, we had our own generator for many years until we were connected to the mains. It ran all the lights and the few electrical products we had, including our new-fangled black and white cabinet TV showing such delights as Dixon of Dock Green, Z-Cars and The Interlude.

I have toyed with the idea of installing composting toilets, having read that the flush lavatory uses 30 per cent of the UK's water supply. Even Glastonbury Festival has replaced its chemical loos with smell-free, waterless, composting toilets. Those of a delicate disposition should look away now…the fact is human faeces in the presence of oxygen breaks down into pathogen-free compost and urine is sterile and full of nitrogen - in other words, ideal fertiliser. Although I’m not, as some people do, going to start peeing on my plants, you’ll be pleased to hear – but not half so pleased as those poor long-suffering neighbours who can see into my garden.

But all that is for the future. For the moment the pristine, flushable loo in the bathroom will have to suffice.

I admit I have some way to go before I can in any shape or form claim to be self-sufficient. The few cherry tomatoes and my "cut and come again” lettuces I have managed to grow are hardly going to sustain the household should the country encounter some ecological or man-made catastrophe which cuts off all supplies.

If we ever get to the stage I might have to reconsider my ban on the AK-47 assault rifle and persuade the better half to start constructing that root cellar.


Start typing Fill in the form below to get an email when there is a new post.