IS it that time of year already? It seems like only yesterday I was wittering on about Christmas Umble Pie, made by peasants from the innards of a deer. Umble Pie is now so far from ‘umble that Heston Blumenthal serves it with powdered duck and smoked confit fennel. Powdered duck? Smoked confit fennel? Don't ask me…
Yes, Christmas looms on the horizon.  I know some parents who spend a small fortune on buying presents for their kids. It wasn't so in my day. Oh dear, I'm becoming one of those boring people, always harping back to the good old days when all I got was a new frock and a tangerine in the foot of a (very small) sock.
But looking back at my own Devon Christmases I have only fond memories. Like most kids in the year dot, we had presents only at birthdays and Christmas. There was always one main present and several little ones, including the very un-PC gifts of sweet cigarettes and a chocolate pipe with desiccated coconut "tobacco". There was always an annual of some kind usually the Beano, Rupert Bear or Champion the Wonder Horse.
In my family there were strict gender demarcations which would make any equality rights officer these days shake their head in despair.  The girls had dolls and books while the boys had tools and Meccano and, one glorious year, a small steam engine that powered the wonderful Meccano creations made by my brothers.
As for the main gift, one year I had a walkie-talkie doll called Susan with black hair and bright red lips. I still had her up to a few years ago when she finally gave up the ghost to depart for that great dolls’ hospital in the sky. By then she was minus her lovely black hair which I cut off when playing hairdressers one day. My mother tried to glue on some new hair so she looked like a minor male celebrity with a bad toupee. Susan was made of hard plastic so not exactly cuddly. Her ‘talk’ was a cry when you tilted her and her ‘walk’ a very stiff-legged perambulation from the hip when you pushed her, resembling not so much a little girl strolling as a Nazi goose-stepping.
Then there was the desk with the lift-up lid which, little swat that I was at Chawleigh Primary School, was one of my favourite presents ever, and one year a Timex Cinderella watch in a ‘glass’ (i.e. plastic) slipper. 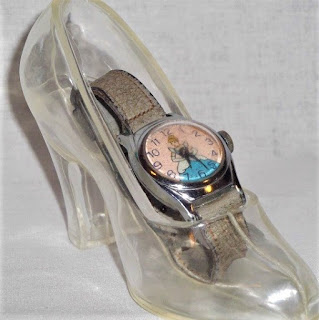 As soon as we stopped believing in Santa we started assiduously searching for the hidden gifts in the run-up to Christmas. We children performed a fingertip search of the house and farm buildings which would make any forensic scientist proud but we never unearthed as much as box of crayons. It was only later that we discovered that all our presents were safely stored at my Auntie Rita's house in Wembworthy and were collected by my father on Christmas Eve when we were  tucked up in bed.
Of course we saved up our pennies to buy presents for mum and dad. Dad nearly always got Polo mints because we had horses and they liked them! Mum was the recipient of a range of cheap ornaments which she pretended to love with a passion. They would stay on the sideboard for a few weeks before being quietly stowed away inside. Or if we were cash-strapped we watched Blue Peter avidly in the run-up to Christmas before cobbling together some flimsy pen pot or a Santa made of cardboard and cottonwool with the obligatory "sticky-backed plastic" holding it all together.
They managed never to look anything but delighted and I know it's a cliché, but it really is the thought that counts.
I’m not quite ready for Christmas yet but I will know that the festive season has well and truly begun when the better half delivers his one and only Christmas joke. He claims that one year his parents gave him an empty shoebox - and told him it was an Action Man deserter.