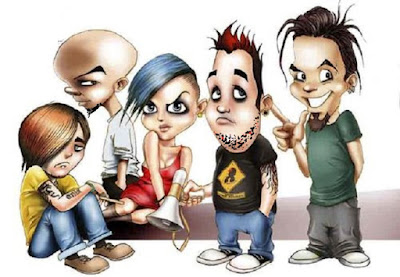 My friend’s son and his friends have formed a band. They’re called Dismembered Armpits –  don't quote me on the name, I just know it was something like that!

They are all teenagers desperate to be and look cool, hence the boys have made a vain attempt to grow beards; now you have the acne peeping through a few wisps of straggly hair.

Dismembered Armpits has so far had two gigs. One was in the back room of a pub which was attended by the four band members, a couple of girlfriends, three classmates and two women who had mistaken the room for the ladies’ lavatory and the audience for the queue. The women hung about for a while before realising their mistake

The other gig was at a village fete. They caused much bemusement to elderly ladies nibbling on their hotdogs to the strains of Bad Boyz Gonna Rip Off Ya Head, a jolly little tune written by their drummer.

But I suppose even The Rolling Stones had to start somewhere.

The band is heavy metal with a nod towards death metal. Does this mean anything to you? It is, as far as I can make out from the monosyllabic grunts that pass for conversation in my friend’s house, a nihilistic look at life, with violence, death and darkness featuring heavily. Usual teenage fare.

My friend was worried that her son was going to grow up to be, if not a serial killer, then one of those weird loners who parents warn you will come and get you if you don’t behave. I told her I was sure it was just a phase. Weren’t our parents petrified that 70s music would turn us all into Janis Joplin or Alice Cooper? But most of us ended up more Olivia Newton John and Bryan Adams.

Dismembered Armpits are on the internet somewhere, on a site that hosts the wannabe rich and famous. I was given a link and made the mistake of logging on before adjusting the volume.

I’ll let you know what the band is like as soon as my perforated eardrums have healed.