I wrote the below in 2013 when Rebecca Adlington was appearing on I’m A Celebrity Get Me Out of Here. Today she was writing in the Sunday Times about how she has come to terms with her looks and the Twitter abuse she received at the time: 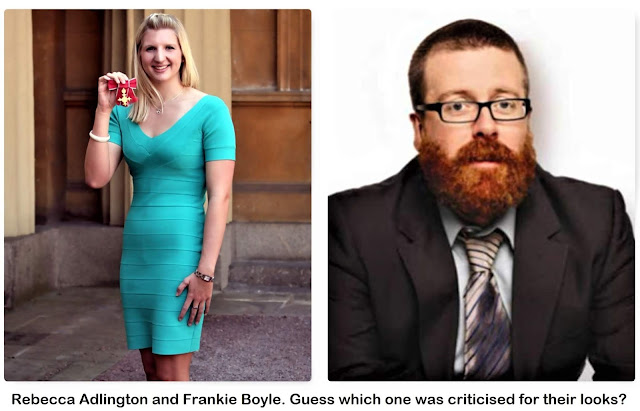 WHAT kind of a shallow world are we living in when a super-talented, double Olympics gold medal winner is full of self-doubt because she doesn’t look like a super model?

Rebecca Adlington has been subjected to the kind of abuse on social media that’s normally reserved for corrupt politicians, hypocritical celebrities and Piers Morgan (who positively relishes it!).

And the comments are all about the way she looks. There’s hardly one about her incredible achievements.

Let’s get this straight. She might not, like 99.9 per cent of us, stop traffic when she walks down the street, but she’s a lovely girl with a perfectly normal face and an incredible athlete’s body.

It’s easy to say she should toughen up and rise above the comments but if, day after day, you are subjected to personal abuse and told how ugly you are, there can hardly be a woman in the world who wouldn’t be affected.

It all began when comedian Frankie Boyle made a “joke ” (I use the word loosely) about Adlington’s looks on TV programme Mock The Week. He followed this up with another scathing comment about her on Twitter.

I refuse to repeat these comments but they were hurtful and abusive. Not only that, they were inaccurate.

But they opened the floodgates to every mean-minded Twitter idiot who thought they would follow suit. It’s that mob mentality where because someone else has done it, it somehow gives you “permission” to do it too.

Adlington is at the moment appearing in reality TV show, I’m A Celebrity…Get Me Out Of Here. She broke down in tears, admitting she felt “very, very insecure” about her looks because of all the abuse she gets.

And can you imagine what these people who criticise her look like? I very much doubt if a George Clooney lookalike is sitting in front of his laptop tapping out this particular brand of moronic abuse.
I imagine some crotch-scratching idiot with a beer gut, hiding behind his anonymity because he is an inadequate bully.

Or a spotty emotionally-stunted adolescent who would be petrified to be in the company of a high-achieving woman.

Not that all of them are men. Women, too, have joined in the abuse. Again, bully is the word that springs to mind.

I find it depressing that after nearly 50 years of fighting for equality, women like Rebecca Adlington are still judged on their looks and not on their personality or achievements. It’s a sad society that values a  surgically enhanced reality TV star or supermodel more than a medal-winning athlete.

Not that there’s anything wrong with being beautiful. Good for you if you have the “pretty gene” but there are other qualities that are equally important.

As for Frankie Boyle, if he were judged on his looks and not his talent, he would never be allowed out in public. And as the father of a young daughter, he should be ashamed of himself.