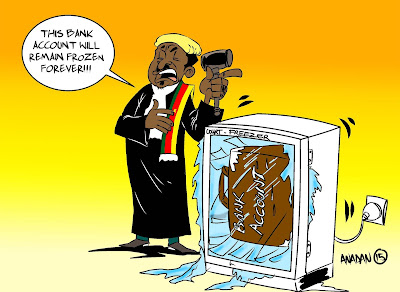 Another of those begging emails has slipped through my spam filter. You know the ones, from someone who has a couple million dollars in the bank and needs my help to get their hands on it.

This one's money was in a frozen account in Dubai. I read the email three times but couldn't quite fathom out how my British bank account was going to unlock it. But all I had to do was click a link and all would be revealed. I declined and deleted. Somehow I don't think I have passed up the chance of making myself a few million quid!

It reminded me of a post I wrote many moons ago - depressing that it's still going on. I repeat it below just in case it passed you by. It was written 10 years ago so I'm not surprised if it has!


I had an email from someone whose father was a tribal king who had died in some wartorn African country. The nasty, nasty military junta has somehow managed to cock up the financial system – who’d have thought it? – and dead king’s beloved son and heir cannot get his inheritance out of the country.


Life’s such a bitch sometimes, isn't it?


This is where I come in. He can transfer the money out of the country to my bank account. What a stroke of luck. So could I possibly see my way clear to send all my bank details to a complete stranger called Prince Nkomo of Gaberone? I would be handsomely paid for my trouble.

Serve the poor bastard right if I'd replied and given him my bank account number. I reckon, given the parlous state of my finances, he'd feel so sorry for me he'd bung me a few thousand.

But I didn't bother. I mean, you don't want to lay that kind of guilt trip on an African prince who's just lost his dad to beri-beri, do you?

I wrote and suggested that maybe he could commit a little identity fraud and collect the money himself. That might sound a tad unethical but there are thousands of people here in Britain whose identities have been stolen and they probably don't even know it.

It's slightly worrying to think there may an Albanian gangster's moll with bright blue eyeshadow, spangly boob tube and dodgy perm claiming to be me. But good luck to her. I wouldn't want to be in her white stilettos for all the illegal immigrants in the Channel Tunnel.

Slightly more worrying is the thought that some eastern European called Boris, not au fait with British names, has stolen my identity. So if you see some barrel-chested Bulgarian minus his front teeth and with his hair Brylcreemed over his bald spot claiming he is called Patricia and lives in a little Devon village, let me know, will you?

Banks want us to believe they are vigilant. Have you seen those adverts where the bank is supposed to be suspicious because an elderly woman has bought tickets to a heavy metal concert on her credit card? Like no doting gran has ever bought anything for her grandson. But I digress.

Would my bank be suspicious if my credit card was used to buy a couple of thousand pounds worth of second hand plumbing equipment, a moustache comb and a year's supply of tinned cabbage soup and dumplings? Would it buggery.

However, I'd have some spotty graduate with a poorer grasp of English than any immigrant on the phone quicker than you could say "education, education, education" if my card had been used to buy a year's subscription to a gym and a crate of bottled water.

Even so, I was quite taken with this identity theft idea. Let some other poor bastard grapple with my bills, overdraft and standing order for See Which Celebrities Have Gained Half An Ounce This Week magazine. So I parcelled up all my bank details and passport, addressed them to The Most Recent Admission and posted them to an immigration centre.

A few days later, back they came in the post neatly folded and with a note: "Thank you for your donation. However, I have just been offered a job as Chief Executive Officer with British Aerospace and I feel taking on the identity of a provincial sub-editor would definitely be a retrograde step. Sincerely, Dr Asajabian."

There's just no helping some people.