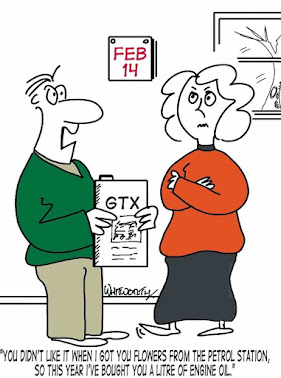 Happy Valentine's Day, everyone. I'm sitting waiting in expectation for jewellery, red roses and chocolates in a heart-shaped box. Sadly, I know I'm waiting in vain. Here's an excerpt from a column I wrote for Devon Life magazine a few years back which will explain all.

Personally, I don’t worry about Valentine’s Day very much, romance being so far off the dearly beloved’s radar that it is practically in Deep Space Nine.

If I’m lucky I’ll get a bunch of flowers bought from our local service station. If I’m even luckier, he will drive straight home with them rather than leave them bouncing about in the back of his car for hours while he’s driving about for work.

For my part, I will buy him something like a bottle of aftershave knowing he would be happier with a pint or two of Pheasant Plucker real ale. I will get a card and write “from your secret admirer” inside and leave it on the doormat, as if there’s a chance he won’t know who it’s from. He will feign surprise and speculate it’s from a gorgeous girl he met in the pub. I will invariably reply: “I hope you remembered to give her back her white stick.”

If I’ve forgotten to buy a card I will find the one I sent him last year and put it in a new envelope. He’s never noticed.  Oh yes, hours of Valentine’s Day fun in our house!

When we first met it was all so different. He booked a table at a romantic Devon restaurant where we exchanged loving glances over chicken in a basket and pledged our undying love over peach melba. In those days flowers came via Interflora, not Texaco.

Still, after more than 30 years together he might be forgiven for allowing the gloss to wear off what some people consider the most romantic day of the year. If hearts and flowers aren’t his forte, he has many more important qualities like loyalty, support and the ability to make me laugh every day.

In any case, the origins of Valentine’s Day are violent and bloody rather than romantic. This is one version I read on the internet (so it’s BOUND to be true…). Valentine was a physician and priest who lived in Rome in the third century. At the time it was illegal for young men to marry because Emperor Claudius II wanted his men to be psyched up for battle rather than worried about their families back home. It’s difficult to concentrate on slinging that spear accurately if you’re concerned wife Agrippina may not have enough denarii to pay the candle merchant.

Valentine took a dim view of the wedding ban and married young couples in secret. He was caught and thrown into prison, tortured and beheaded.

This legend may or may not be true - there are several other versions of the story and several other contenders for the title of St Valentine.

Like many other festivals it was probably the weaving together of the legend of the Christian St Valentine and the pagan feast of Lupercalia. During Lupercalia young women wrote their names on slips of paper and put them in a pot. The men would then each draw out a name and court the woman - a bit like modern online dating, I suppose. Altogether more disturbing was the practice of lashing young women with a leather whip during Lupercalia in the belief it would make girls more fertile.

Of course there are many people who have no “valentine” at all. Some are very happy with this state of affairs while others yearn for that special someone with whom to share their life. The more cynical among us have labelled Valentine’s Day a commercial trick played on us by card shops and florists and the even more cynical call it Singles Awareness Day.

Well, I hope you all get at least a card, even if it is last year’s recycled. I also hope it has a loving message, just like the one my friend received from her doctor boyfriend. It said: “You make my heart have premature ventricular contractions.” Now that’s what I call romance.