Please Read This. Thank You. 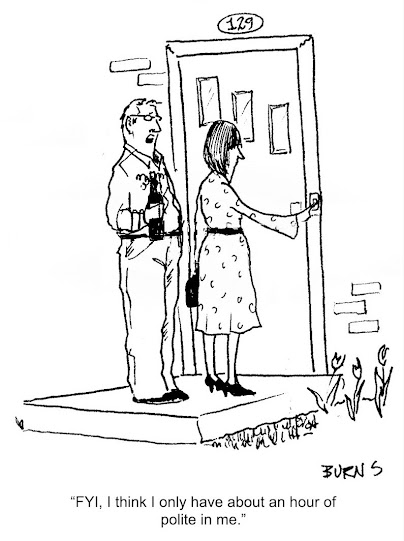 THERE I was walking down the street, my feet on the pavement but my head in the clouds. Coming in the other direction was a woman in very much the same frame of mind - and we collided. There followed one of those typically British conversations.

And we smiled at each other and went our separate ways.

How typically Devonian, I thought. For my friends from distant lands, Devon is a predominantly rural county in the South West of England.  We are mainly a laidback, friendly people and among the politest on the planet.

I have rarely encountered bad manners in the county and I’m speaking as someone who worked at the coalface of local newspapers for many years. Very rarely was anyone rude to me, not even the man in court for fairly heinous offences who phoned to ask me to keep his case out of the paper. I told him that wasn’t possible and his response was, “Not even if I say please?” He was obviously well brought up in one respect, if not in others.

I like it that Devonians are mainly polite. I can't pretend that there aren't plenty of rude and thoughtless Devonians as well, unfortunately, but for most of us, politeness is a way of life. It’s not even a generation thing. All the children I know are taught to say "please" and "thank you" and to look after elderly relatives - well, at least my kind and caring young relatives do... and manage to look pleased as they do so!

Politeness can go too far, of course. I do suffer a bit from the kind of politeness which when asked by the hairdresser if everything is OK, I reply: “Lovely, thank you,” and then go home to cry and cover all the mirrors.

Have you been given a gift you don’t like? “Thank you so much,” you say, “That’s, um, interesting,” when what you really mean is, “I wouldn’t use it in public if my life depended upon it.”

As my mother often told me, “Good manners cost nothing,” and politeness oils the wheels of human interaction.

As the anonymity of the internet brings out the worst in some people, causing trolls to crawl out from under their stones to spout their vitriol, we should consider what writer Robert A Heinlein said:  “A dying culture invariably exhibits personal rudeness. Bad manners. Lack of consideration for others in minor matters. A loss of politeness, of gentle manners, is more significant than is a riot.”

Thank you for reading this post and I hope you liked it. But no worries if you didn't, it's perfectly fine. I will leave you with this thought from Theodore Roosevelt.