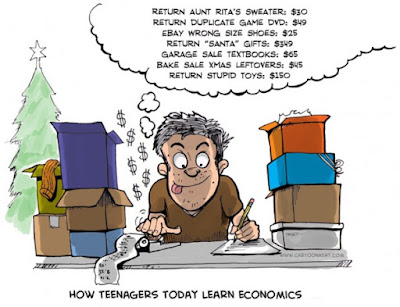 Today I was battling through the crowds trying to do some Christmas shopping. It was a bit of a cop-out as I bought gift tokens for the teenage members of my family. But what can you buy a teenager that won’t necessitate a sharp dig in their ribs and a hissed and brittle "say thank you to Auntie” from their mum?

Not that any of the teenagers in my family resemble those monstrous monosyllabic creations you hear people talk about - not with me, at least. They are all perfectly pleasant kids who treat this aunt with bemused tolerance...but their tastes change faster than my dearly beloved can down a pint! .

It seems like only yesterday I was buying building blocks and outfits for Barbie. Now I don't know from one day to the next what's "coo-el" and what isn't. I try to engage them in conversation about a band that yesterday was totally bangin'. Today, any mention of the band's name and eyes roll back into heads as if you had suggested they might quite like to listen to your Andy Williams Greatest Hits CD.

Last month Niece One was into ponies and netball. Last week she was into a spotty teenage boy whose main attraction is that he has his own car. I use the word “car” loosely. It’s a 10-year-old red Ford Fiesta with one grey door, the obligatory rear spoiler and a sticky patch where the L-plate has recently been peeled off. Her parents worry every time she goes out in this contraption but as far as I can see it would struggle to reach 40mph down a steep hill with a following wind. In any case, her unsmiling dad has threatened the boy with dire consequences should he harm one hair of his little girl's head.

So gift tokens it is. I don’t want to be like one aunt in the family who bought Dinky toys for her 15-year-old nephew. I remember wondering how she could do such a thing – now I know. He may be six-foot tall with a six o' clock shadow but in my head he's still that little boy banging nails into a felt-covered pad with a wooden hammer.

Email ThisBlogThis!Share to TwitterShare to FacebookShare to Pinterest
Labels: teenagers