It's A Major Issue 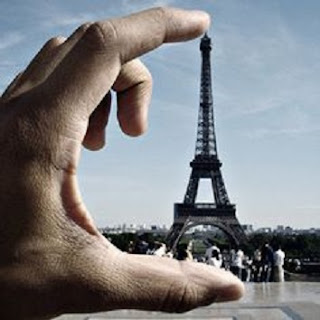 One of my friends told me she had driven too close to a parked car and hit her wing mirror. No great damage done. The other car was fine and hers just needed the cover replacing on the mirror. She said her husband tut-tutted in that superior way men have on the rare occasions they are better at something than we are and rambled on about women having no spatial awareness.

I told her it was nothing to do with spatial awareness. Some women have difficulty judging lengths and distances purely because men have been telling us since they could form whole sentences that the distance between their thumb and forefinger is 12 inches. No wonder we're confused.

In the interests of honesty, I have to say my spatial awareness is very poor, hence the long and deep scrape along the side of my car, acquired when I got too close to a gatepost when exiting my brother's yard. Sadly this was not the first time I had done that. Did I get sympathy from the man who is supposed to support and love me? No I did not. He sighed deeply while shaking his head and then said, "Your next car had better be brick coloured." The man's a fool.

Size and distances are all a matter of scale, of course.

Elder sister can remember when she was five or six our eldest brother, a whole two years older than her and therefore a man of the world, trying to explain the vast scale of London. We lived on a farm and he said it was at least as wide as the distance from our house to the gate down the road - about a quarter of a mile - and she was really impressed that there was a city in the world as big as that.

Then this morning I was listening to a local radio bulletin which described three things as "major". It's a word that leaps out of the mouths of radio and television reporters. It's a word so misused and abused that it's become meaningless. Every fire is a "major" fire - the fact that it destroyed a factory, caused half a million pounds worth of damage and put 200 people out of work had already alerted me to the fact that it was quite big; but it's also a major fire if a rubbish bin has been set alight.

All exhibitions are "major" exhibitions. I shout at the radio, "Compared to WHAT? Compared to the current exhibition on in the Queen's Gallery at Buckingham Palace? Are you sure an exhibition in the village hall consisting of three watercolours of cows and an oil painting of Elsie Smith's grandson constitute a MAJOR exhibition? It's a major incident if there's a siege involving a gunman holding an entire family hostage but it's also a "major" incident if three kids daub some graffiti on a wall.

Listen to the news and spot the "majors". The only time I want to hear that term used is if it's describing Major Smith in the Army.

In fact, I am majorly pissed off about it. So pissed off that I'm going to throw a major tantrum. I hope I don't make the news.