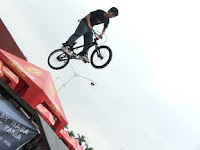 EVERYWHERE you look these days there’s a story about Extreme Sports. A young man on breakfast TV this week was talking about taking part in sports like mountain BMX and snowboarding.
He seemed a nice enough lad but the dearly beloved scoffed mercilessly at his earnest interview.
“Extreme Sports? Didn’t these kids ever have a childhood?” he sneered.
Back in the days when it used to snow in the winter down here in Devon, he and his friends used a sheet of galvanised iron as a sleigh. For those of you not brought up in the country, sheets of galvanised iron are corrugated and measure about 6ft by 3ft. They are thin sheets with edges so sharp they could amputate a small boy’s hand if he fell on it at a funny angle ….. or separate Gwyneth Paltrow from her 7-inch heels before Chris Martin had time to shout a warning.
The DB and his friends would roll up the front of the sheet to make it vaguely toboggan-shaped. Four or five of them would pile onto it at the top of the steepest hill in their village and set off, eventually reaching speeds of, if not Lewis Hamilton level, then Jensen Button level.
As if this wasn’t bad enough, when they reached the bottom of the field they all had to duck to get under a barbed wire fence. It makes me go cold just thinking about it!
Then he was on about riding helter-skelter on a bicycle with no brakes, his friend hanging on for dear life behind him as he pedalled as fast as he could down another hill – the only way they could prevent serious injury was to bail out before the bicycle ploughed into a bramble-filled hedge.
My brothers, too, were somewhat on the reckless side. They were forever making go-karts (we called them trolleys) out of old pram wheels and bits of wood. I think I’ve mentioned before how these trolleys were the envy of the neighbourhood with travelling salesmen stopping by to have a go! Pram wheels were great for trolleys – brakes, however, were another thing entirely.
Pram brakes in those days consisted of a pulling a lever to apply a small block to a wheel. You can imagine how effective this was on a trolley going at 40mph down a 1 in 4 hill.
My sister was taken for a ride on one of these things and fell off at the bottom of the hill, impregnating her leg with bits of gravel. Knowing my dad he probably dabbed some neat iodine on it and told her to stop snivelling. Some 30 years later, a stone worked its way out of her thigh – clean as a whistle.
Then there was Extreme Pony-Riding, racing around fields and clearing (or not) home-made jumps and weaving in and out of home-made obstacle courses.
We lived on a farm in pre-health and safety days, so in some respects we took part in Extreme Sports every day, whether it was Extreme Cow-Milking (some of those cows had a kick like a mule); Extreme Farmyard Machinery-Dodging (my father was the world’s worst driver); or Extreme Geese-Handling (I swear, geese are the nastiest creatures on God’s earth. I’d rather meet a rabid dog than a hissing goose, any day).
I’m not denigrating anyone who takes part in conventional Extreme Sports – it’s wonderful that young people are taking controlled risks and going out and having fun. But it has occurred to me that youngsters never got these things out of their system as children. They are shielded from any kind of danger by over-protective parents and schools and communities ruled by health and safety legislation.
Consequently, when they are in their teens and 20s, they are suffering from adrenaline-rush deprivation and have to make up for it by taking part in Extreme Sports.
Oh, I’ve just invented a new syndrome – Adrenaline Rush Deprivation, or ARD. Soon there’ll be pills and counselling for it, learned articles in the British Medical Journal and "sufferers" coming to blows on the Jerry Springer Show.
Remember, you read it here first.
at May 02, 2008