The Dark Side of Astrology 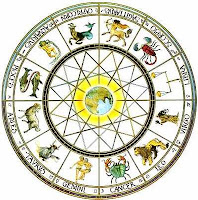 DO you believe in astrology? I must admit I always glance at my horoscope in newspapers and magazines; believe them if they're good and dismiss them if they're bad. If you think about it logically, there are 12 signs of the zodiac so the likelihood of one-twelfth of the population having the same personality as you is somehow insulting and takes no account of the complexity of the human persona.
I once had a long and earnest discussion with a woman at a party about astrology. I told her I was an Aries and she went into a long and detailed explanation of how she could tell I was an Aries, picking out various points of my personality to back up her views. Trouble is, I'm actually a Gemini (ah, I can hear you afficionados, say, Gemini - devious) and when I told her this later she was furious. Oh well, can't win 'em all.
Every sign has its good points and the trouble with most astrologers is that they tell you what you want to hear so when they say you’re clever and creative with a great sense of humour, are you going to disagree?

I'm more interested in the dark side of astrology - those parts of our personality that we like to keep hidden. I reckon, if there is any truth in astrology, that if you turn it on its head you get a truer picture of what a person is like.

Here are the negative sides of each sign. OK, I might have SLIGHTLY exaggerated, but I am a Gemini after all so what do you expect? You can’t believe a word I say, or can you ………?

Aries:
Unless you are a masochist, never get tangled up with the sadistic Arian. They love to humiliate you, control you and inflict pain on you. They are the megalomaniacs of the zodiac and have an ego the size of the Empire State Building. Don’t cross them or you’ll find just how short a fuse they have – yes, they’re a notoriously bad-tempered lot. They have a propensity to invade Poland.
Famous Arians: Adolf Hitler, Hugh Hefner, Alan Sugar, Celine Dion, Piers Morgan

Taurus:
Taureans are completely materialistic. They know the cost of everything and the value of nothing. They are totally obsessed by wealth and fame and may end up as a stalker. Despite being so starstruck, they are jealous and resentful of anyone who has made it. They are stupid, dishonest and overbearing. If you suspect a Taurean doesn't like you, never eat or drink anything they offer you.
Famous Taureans: Lucrezia Borgia, Machiavelli, Saddam Hussein, Tony Blair, Pol Pot

Gemini:
Geminians are two-faced manipulators. They will pledge their undying love to you one day and the next start an affair with your best friend. They have turned lying and deceit into an art form. They rarely get anywhere in life owing to a complete inability to concentrate on anything for longer than two minutes. Never leave your spouse unattended in the presence of a Gemini.
Famous Geminians: Wallis Simpson, George Bush, Jeffery Dahmer, Naomi Campbell, Boy George

Cancer:
Moan, moan, moan, moan. Will they EVER stop complaining? They are permanently stressed out, worrying about every little detail of their life. If a friend phones you at two in the morning, sobbing about some problem, you can bet your life it’s a Cancerian. They are paranoid and think everyone is against them. They are meek and mild until someone upsets them, then they turn into Attila the Hun. They will kick out - but on the plus side, could well be wearing very nice shoes.
Famous Cancerians: Imelda Marcos, Nancy Reagan, O J Simpson, Courtney Love, Mike Tyson,

Leo:
The world doesn’t revolve around the sun; it revolves around Leos. Or so they believe. They are so arrogant you want to slap them – very hard. God help you if your boss is a Leo because they’ll treat you like a slave. However, Leos are so gullible that they are easily swayed by flattery – no matter how thick you lay it on, they’ll believe it. Never leave your child unattended in the presence of a Leo - they will try to adopt it.
Famous Leos: Madonna, Jennifer Lopez, Napoleon, Mussolini, Castro

Virgo:
Virgoans are the trainspotters of the Zodiac – prissy, pernickety and pedantic. They are meticulously tidy and organised. They are cold, critical and cynical. The last person you want to get cornered by at a party is a Virgoan. They are totally boring and will regale you for hours (it might only be minutes but it’ll feel like hours) about their tedious hobbies. However, they often wish to be alone, which is a blessing.
Famous Virgoans: Greta Garbo, Ivan the Terrible, Mickey Mouse, Queen Elizabeth the First,

Libra:
You needn’t worry about not looking your best if you’re with a Libran; they only have eyes for themselves. Yet they are needy, clingy and insecure. They are emotionally unstable, always asking for reassurance. They want everything to be perfect and get uptight and nitpicky if they aren’t. They are weak and superficial yet absolutely convinced they are right.
Famous Librans: Simon Cowell, Margaret Thatcher, Peter Mandelson, Cliff Richard, Aleister Crowley

Scorpio:
What a bossy boots! Scorpios love power and will stop at nothing to get it. They’re totally ruthless. They love to belittle and demoralise you. They are secretive and will always try to make you believe they know more than they actually do. Their brains are in their – well, not their heads; they are obsessed by sex. They may look like a geek but they aim to take over the world.
Famous Scorpians: Bill Gates, Hillary Clinton, Charles Manson, Joseph Goebbels, Gordon Ramsay

Sagittarius:
Sagittarians are very good a making promises. Unfortunately, they never keep them. They are pathetically eager to please and want everyone to love them, rather like a boisterous, annoying puppy. And they dribble as much. They are completely tactless and will embarrass you in public. They are clumsy, crafty and craven. They have the common touch - emphasis on common.
Famous Sagittarians: Britney Spears, Walt Disney, Steven Spielberg, Joseph Stalin, Billy the Kid

Capricorn:
Whatever you can do, a Capricorn can do it better; whatever you know, a Capricorn knows more. That’s what they believe. They’re usually wrong; but that’s what they believe. They are blunt to the point of rudeness and they have absolutely no sense of humour. They are hypercritical of everything you do but see it as just being honest. They are really annoying people you’d swim a swirling rapid to avoid. Never sneeze in their presence, unless you want to be sprayed with disinfectant.
Famous Capricorn: Howard Hughes, J. Edgar Hoover, Herman Goering, Quentin Crisp, Al Capone

Aquarius:
They are colder than the coldest fish – completely emotionless. Yet they hide their lack of feeling behind a smiling, happy-go-lucky exterior. Don’t be fooled as they have huge ambition and will trample over anyone in their desperate desire to get to the top. They are eccentric idiots. Their orange skin usually shines brighter than their intellect.
Famous Aquarian: Paris Hilton, Dame Edna Everage, Ted Bundy, Yoko Ono, Sarah Palin

Pisces:
Pisceans are slippery, sly sycophants. Despite being the fishy sign of the zodiac they love nothing better than to get their hooks into you and will exasperate you with their emotional neediness. They are bound to be addicted to something, whether it’s drugs, alcohol, sex, food or work – or maybe all of them at the same time. Many are deeply disturbed so avoid ever being alone in a room with one.
Famous Piscean: John Wayne Gacy, Aileen Wuornos, Jimmy Swaggart, Gordon Brown, Ivana Trump
at July 11, 2009