The Little Engine That Couldn't 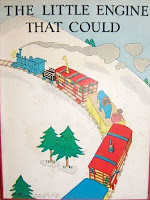 I WAS sitting around my kitchen table last night with a few friends (and a couple bottles of red wine) when the conversation turned to trains.

The last time I was on a train, five or six years ago, the journey was featured in the local evening paper under the headline which included the words "nightmare train journey".

I had been to London with my sister who had been invited to a royal garden party (what an eye-opener that was, what with a plethora of much-shorter-than-you’d-think royals, crustless sandwiches, nice cake and Jennie Bond wearing a gold ankle bracelet).

We had a lovely day in the Buckingham Palace back garden which is slightly larger than mine – by the size of a small county. There wasn’t a patio chair, rickety bird table, garden shed, stray leaf or weed in sight.

The much-shorter-than-you’d-think royals seem quite jolly. There was lots of laughter and the sun shone. My mother has a picture of my sister and me, standing outside Buck House in our best frocks and hats. I was wearing some hideous turquoise get-up with a beige hat. What was I thinking?

All in all, apart from my mis-placed sartorial style, it was a lovely day. ... until our train home reached Taunton.

It started to go slower and slower. The message came over the tannoy that there was some kind of problem but if we could only get to the top of the hill we could freewheel down the other side and hopefully reach Tiverton Parkway where we could pick up another train.

Sadly, despite everyone on the train holding their collective breath, the train didn’t quite make it. I was reminded of the children’s song I used to listen to on Saturday mornings on the Uncle Mac radio programme (anyone who can remember Uncle Mac is showing their age). I think it was called The Little Engine That Could and was sung by Burl Ives.

We ground to a halt while, rather worryingly, a train guard ran down the line behind us swinging a lantern to warn any other trains that might be approaching. Another message came over the tannoy that, hopefully, when the engine had cooled down, it might start again. We waited an hour. The train cooled down. Our collective breath was now bated. Would it start again?

By now it was dark. We sat there another two hours while there was much activity outside. We could see torches swinging up and down the line and could here much banging and yelling.

Then, I suppose, someone must have had a cunning plan. If we could hang on a little while longer, the milk train from Taunton to Exeter could come along behind us, push us to the top of the hill and then we could cruise to Tiverton Parkway.

Now I’m no train expert but it did seem a rather Heath Robinson way of solving a problem. However, that’s what happened and we eventually drifted into the Tiverton station, disembarked and waited for the train to take us the 15 miles to Exeter St David’s.

We stood on that platform and waited another hour, eventually getting into Exeter at 1am (the train had been due in at 9pm).

Still, it wasn't as bad as it might have been. We did get a free round of sandwiches and a cup of coffee for our trouble.