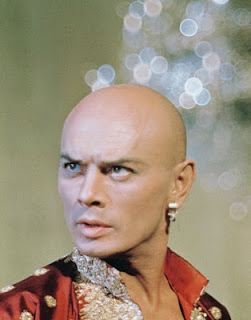 I’VE just had my hair cut. This may seem like no big deal to most of you but I have been known to return home after going to the hairdresser’s and sob. And I’m not particularly given to tears.

I hate visiting the hairdresser’s so much that I go only once in a blue moon - or should that be once in a blue rinse? I have had some bad experiences in hairdresser’s and never walk out with the style that was in my head when I walked in. I have taken in photographs of the style I want - and left wondering whether they’d dropped the picture on the floor and accidentally picked one up of Yul Brynner by mistake.

I’ve had haircuts where it might have been cheaper to crawl through a bush backwards and get the same effect.

In the past I've had, amongst others, a feather cut, an urchin cut, a curly perm and a pageboy - all by accident, apart from the perm which I admit I asked for. However, what I didn't ask for was to end up looking as if I'd touched an electricity pylon with a metal bar.

I forget from one visit to the salon to the next what I’m supposed to do. It’s easy for you men. You flop yourself into a chair, chat inanely about the weather, women with big bazookas and football, get something for the weekend (whether you need it or not) and you’re done.

For women it’s a whole new ball game. I’m utterly confused by the gowns. Do they do up at the front or back?

Then there’s the indignity of being bent over backwards over the basin while the gum-chewing trainee with the dyed black asymmetric hair either scalds your head with boiling water or makes your teeth chatter with freezing cold. Whenever  in this position you can’t help but think of the verse from the Victoria Wood song:

“It’s folly, it’s jolly,
"Bend me over backwards
On the Hostess trolley.”

Then there’s the musical chairs. I’m never quite sure when you’re supposed to move from one chair to another and I end up doing some kind of nervous bobbing motion like I’m genuflecting to the Queen.

Anyway, this time I managed to get through the extreme water temperature torture and am finally sitting  in the correct chair in front of the mirror with my wet, shoulder-length hair while a very nice girl  is asking me what I want done. And here’s another problem. I never know the terminology. I start to explain that I want it much shorter and layered.

“A graduated bob?” she asks.

A what? I have no idea what a graduated bob is.

Of course, what I really want is to look 20 years younger, several pounds slimmer and be mistaken for Catherine Zeta Jones whenever I visit Wales. That ain’t gonna happen.

Alternatively, just like on America’s Next Top Model, I want to walk in looking like an average woman, allow them to give me a “makeover” which I’m not allowed to see until it’s done, and walk out looking edgy and glamorous. That ain’t gonna happen either.

So I ask her to abandon the graduated bob. In the mirror I catch a sudden glimpse of fear in her eyes. She’s wondering whether I’m going to ask her to do something impossible, given that my hair is already up to my ears.

I point at one of the hairstyle pictures on the wall, which to my eyes looks achievable. “Like that, only not so choppy,” I say and shut my eyes to preclude any further conversation.

When I opened them, I was moderately pleased. I didn’t cry at any rate, so that was a bonus.

The dearly beloved said he liked it - but he would have said it was OK even if I’d ended up looking like Quasimodo’s sister. He’s learned over several years that when it comes to me and my hair, honesty is definitely not the best policy.

My mother’s response was a bit more muted. She looked me up and down, frowned, and said: “Well, at least it’s tidier.”

Can’t wait now until I have to go again - oh in about a year when it’s not quite so tidy any more.