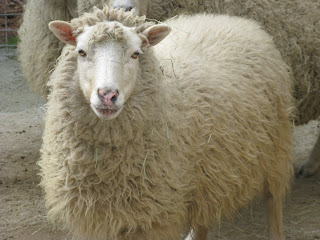 Two of the things that have made me laugh out loud in the last couple of days:

I was talking to a friend - a real Devonshire farmer - whose husband suffers from diabetes. She had got home to find him slumped on the floor (so far, not funny, I know). She knew she had to get some medication into him as soon as possible. She wanted to sit him up so that he wouldn't choke but found it difficult because he was so heavy. I'll call them Bill and Bertha to preserve their anonymity.

In a broad Devonshire accent she told me: "I said to meself, now Bertha, if you can lift a bleddy yaw you can lift Bill, so I 'eaved 'n up and managed to pour some stuff down 'is thrawt."

Translation:  "I said to myself, now Bertha, if you can lift a bloody ewe you can lift Bill, so I heaved him up and managed to pour some stuff down his throat."

The other thing came in a court story at work (I work for a newspaper):

Things You Know Are Going To End Badly

"...the solicitor for the defence said his client had taken too much anti-psychotic medication earlier that day. He felt unwell while walking to Lidl to buy dog food for his rottweiler."

Oh dear, no happy ending to that story....