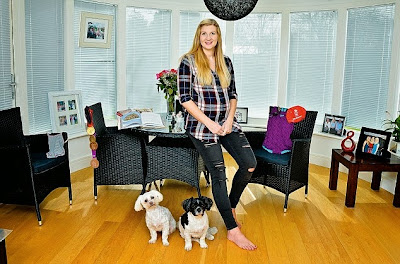 NEVER, ever be in the same room as the dearly beloved when he is reading a newspaper. He caught me on the hop at the weekend and had started reading from the Daily Diatribe before I had time to hide it under several layers of less spleen-inducing publications like Lovely Little Pussycats or Pollyanna Periodical.

I had to suffer three rants in as many minutes as he tore through the paper from news to sport.

First up was a picture of the lovely Rebecca Adlington. He likes and admires Rebecca but the misguided young swimmer had made the dastardly mistake of posing in RIPPED JEANS.

You would have thought that this designer statement would be way above the concerns of a working class boy brought up wearing short trousers and buckle straps. But no. The working class bit was germane to his whole rant.

"Ripped jeans? With all her money? I wore those when I was ten, not  because I was an effing model [hardly....] but because we didn't have any effing money for new jeans. Who do they think they're kidding? It's all 'oo, look at me. I have so much money I can wear ripped jeans and everyone will know I paid an effing fortune for them'."

Then it was on to the Barclays Manager of the Month award. That's football, by the way. A columnist admitted they had never voted for Chelsea's Jose Mourinho, despite the team winning the league this season.The dearly beloved likes and admires Mourinho too - but this wasn't the reason for the rant. No, it was the line in the story that said the voting panel consisted of a cross-section of the media, administrators, ex-players and fans based overseas and in the UK.

"OVERSEAS? Why should fans OVERSEAS have any say in it? I don't expect they're even going to any games. What do they know? OVERSEAS? They've probably watched half a game on some wonky TV in the arse end of beyond." He said this in the tone of voice that implied they were all paid-up members of Al Qaeda.

Then it was the possible relegation of Newcastle. Apologies to all Newcastle fans but the team is not flavour of the month with the dearly beloved. He "likes and admires" ex-players like Alan Shearer and David Ginola and a few of the present squad have received some grudging admiration. No, his beef with Newcastle is that the team is sponsored by pay-day lender Wonga. Please don't get him started on pay-day lenders. Please don't.

"Effing Wonga was charging nearly 6,000% APR at one point. SIX THOUSAND PER CENT. It's obscene and no football team should be encouraging it. Effing Newcastle, I hope they get relegated."

I was going to point out that Wonga isn't charging that much at the moment and the government has capped the annual interest rate of pay-day lenders at 1,500% - but I didn't want to encourage another explosion. After all, 1,500% is still a huge amount.

He opened his mouth for, I feared, another rant. So I quickly offered to make a cup of tea. I took mine to drink in the garden, the rants reduced to a distant rumble in a faraway room.