The Past Is a Foreign Country 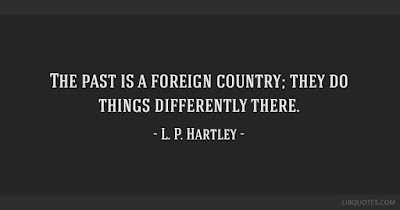 I RARELY ride in the backs of cars these days. The other day, though, I found myself in the back seat and had to be reminded to fasten my seat-belt. As I was clunk-clicking, a memory came to me of when I was a child.

My father was driving along the country roads and I was standing up in the back of the car, as we kids did in those days, so I could see where we were going. He met another car, a rare occurrence in my neck of the woods in the 1950s (yes, I'm that old!), braked sharpish and I went flying over the back seat into the well of the passenger seat. Luckily I was unhurt, and it was a lesson learnt. For years afterwards, though, the incident was never used as a salutary warning but as something to joke about - but that's my family for you! 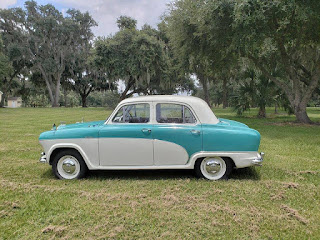 It made me think of all the other madcap adventures we had as children. We tore around getting up to mischief before going home, dirty but happy and our parents none the wiser.

Living on a farm we were sent out to play in acres of fields where we climbed trees, built dens and generally created mayhem. There is a family picture of my brother standing up precariously on a branch of a tall tree. You can see from the picture that it is impossible to climb down from that tree. What happened was that his older sister - not me! - used a ladder to inveigle him up there, persuaded him to stand up and had then taken his picture.

We played on farm machinery with spikes and spinning wheels yet never hurt ourselves.  We crossed fields full of animals without a moment's hesitation. We played in animal pens no doubt full of harmful bugs. We built "houses" out of bales of hay or straw not worried that they would collapse on top of us.  Don't get me wrong, this is not the type of thing I am advocating. Looking back, it sounds foolhardy at the very least. I guess my brothers and sisters and I were just lucky that we never did ourselves any serious damage.

All these memories brought on an uncharacteristic nostalgic streak. I tend to look forward rather than harp about "the good old days"   when, to quote the cliché, we always left our front door unlocked. In any case, burglars would have had slim pickings in our house with my tenant farmer parents having seven children to bring up.  There was no family silver, no valuable heirlooms and no hidden safe, only a meat safe in the cool room (called the dairy, as all farming families know).

I hate to turn into one of those "everything was better in the good old days" people - but some things were. Our elders and betters seemed to be blessed with rather more common sense than they are today. You could climb a ladder at work without having a week of health and safety training, Food was food, My mother would  have mocked us unmercifully if we had all demanded different dishes at dinner. You ate what was put in front of you or you didn't eat at all. There were no food scares with certain items good for you one week and likely to give you a slow painful death the next.

In my little corner of North Devon there was very little crime, probably because there was a policeman living in every big village. We had one television with two channels, BBC and ITV (showing my age again) and we were not allowed to say we were "bored" - if you did, some job would soon be found for you.

There were no mobile phones so no trolling and sexting. If you made a fool of yourself it was all forgotten in a week and not recorded forever in a video that's gone viral.
I know that in my nostalgic mood I am looking back through rose-coloured glasses.Plenty of things have improved since I was a child; I don't look back fondly on everything. There were lots of -isms knocking about when I was young - including sexism and racism. Homophobia was par for the course and no one thought twice about paying women less than men for doing exactly the same job.  I'm not hankering back to the days of polio and TB.Now I just wish there was a happy medium and more common sense came into play rather than relying on rules and regulations.You don't need a law to tell you that poking yourself in the eyes with a red-hot poker is going to make you blind.
*     *     *     *     *
Since writing the above I've received this email which has reminded me that back in the day there were no phone calls from people trying to scam you out of your money. There were no home computers so I never received an email from some poor African prince whose father had died in a bloody coup offering to give me hundreds of thousands of pounds in return for helping him to get his money out of the country. Of course, he'll need all my bank details...  Which reminds me I must reply to this email from Melania Trump. She inadvertently calls herself Melanin but I suppose she's got it wrong because English isn't her first language. Anyway, she wants to give me $60 million, which is very nice of her. I didn't even realise she knew me but she probably follows this blog. Off now to reply and get that $60 million. 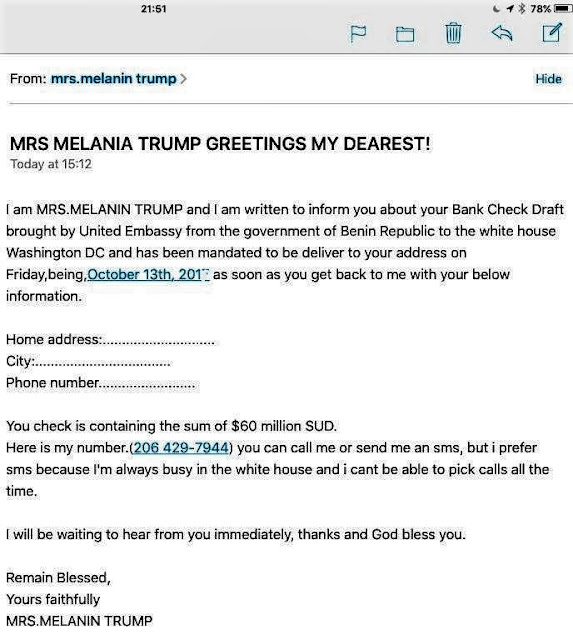 And another thing... My diva cat has written a book (I know, I know, not everyone's cup of tea) but other people than my family have written extremely good reviews about it on Amazon. She's a grumpy little so and so but we love her to bits. Have a look at NOT SO SWEET TOFFEE.
at July 04, 2019