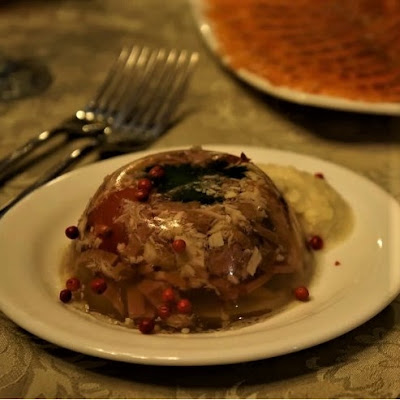 Something unrecognisable in aspic

My friend and I were reminiscing about eating out when we were kids. Many moons ago when I was a child, the height of sophistication was a pub meal of chicken or scampi in a basket followed by rum baba. Does anyone these days serve anything in a basket? I've eaten food on slates and wooden slabs but I am no longer served anything in a basket.

Later every meal seemed to consist of prawn cocktail, rump steak and apple pie. Actually, I still love all those things!

The men downed beer, stout or whisky and the women drank port and lemon, Babycham or schooners of sherry. We kids had bottles of pop with straws.  Few people drank wine then but by the end of the 1960s we were feeling very up-market, quaffing our Blue Nun, Chianti and Mateus Rosé in its distinctively-shaped bottle. I lost count of the number of parties I went to in the early 70s with candles stuck in the top of Mateus Rosé bottles. 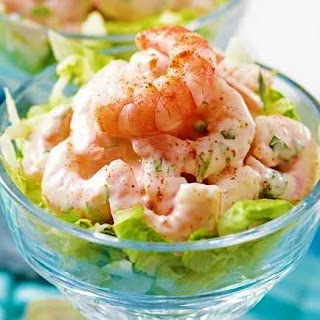 If we were taken to the big city of Exeter (big to us, smallish in anyone else's eyes)  for a shopping trip, we visited a restaurant called Watty's. The waitresses were all impeccably dressed in black with white aprons and hats and there was strange cutlery like fish knives and soup spoons. It was the first place I ever saw, to my complete astonishment, chefs wearing those tall white hats called toques.  I remember the shock as if it were yesterday. We always had whatever the roast dinner of the day was with thick slices of meat and even thicker gravy – hardly the “jus” of modern chefs.

Much later we visited a Chinese restaurant. Just the once because my father was appalled that they had the temerity to put some kind of spicy sauce on his pork chop. SPICY SAUCE! Everyone knew you only had pork chop with chips and peas and maybe a very plain gravy if Mum was pushing the boat out. 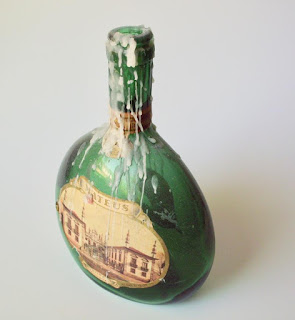 In the 1970s, when we were feeling posh, we visited a Berni Inn where the meal was invariably rump steak with salad and chips or jacket potato, followed by cheese, ice cream or apple pie. In more upmarket restaurants chefs overdosed on aspic or set fire to the food.

Takeaways soon became a thing. There is now an endless variety of takeaway food from a Thai curry to a Turkish kebab...we never wavered from fish and chips.

Then in the 1980s there was nouvelle cuisine with its big plates and tiny portions, not exactly to the liking of our farming family. When the waiter removed the huge cloche covering the food, we expected to see a big slab of meat and oodles of sauce, not a few shreds and a smear. We looked around in vain for the rest of the food and ate cheese on toast when we got home.

All this talk of food is making me feel hungry so I'll finish now and go to the kitchen to make myself a nice prawn cocktail. I'm feeling nostalgic.