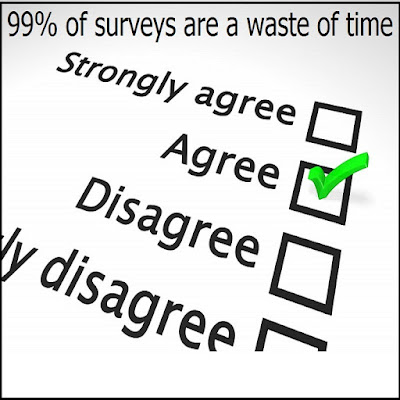 I think I must be caught up in some strange "cookie" world. I don't mean those rather nice sweet things we Brits call biscuits but those nefarious internet things that ensure I keep seeing adverts for weight loss products and wrinkle creams. I can cope with those by convincing myself they must have got me muddled up with someone else much older and fatter. Yes, that would be it...

But I also get links to lots of surveys. I'm not sure why. Maybe if I ignored them they wouldn't keep appearing but I can't resist seeing what piece of daft research has been occupying the best brains in society.

Ninety-nine per cent of them tell you something you already knew or something so obscure that you pray to get the five minutes of life back that you wasted on reading them. This week the ones that have been appearing have been mind-blowingly inconsequential.

First, there was the astonishing news that rock stars, on average, die younger than, say, chartered surveyors. You don't say.

Then I had one that told me that people tend to put on weight while on holiday. Really? And there was me under the impression that copious amounts of sangria or tequila slammers washing down five course dinners after a day spark out on the beach was slimming.

Then there was one that has discovered that if you feed kids crap, they'll feel like shit. Shovel vast quantities of additive-filled sugary or salty snacks into their ever-open little gobs, and they are going to behave badly.Well, I'll go the foot of our stairs. There's a surprise.

What I want to know is how much someone was paid to find out these blindingly obvious facts. They could have saved their money and come and asked me.

I'm going to write to Oxford University and suggest they set up a Stating The Bleeding Obvious research chair for me. I can envisage my day's work. Start at 9am with a brainstorming session with three comatose students.

"Well, guys and gals, what shall we research this week?"

"Thank you for that input, Wayne. Anyone else?"

"How 'bout finding out wevah if you drive blindfolded, right, you have, right, y'know, more accidents or sumfink?"

"Good idea, Chardonnay, but Cambridge University has already done that one."

Alfaromeo wipes the sleep from his eyes and pipes up: "Hey, I have a wizard idea. Let's find out, OK?, if you lie in the sun in Barbados, OK?, you get a tan quicker than if you, like, lie in the sun in Alaska in the winter. Yah?"

"Brilliant, Alf. You and I can do our research in Barbados for three months and Wayne and Chardonnay can hop over to Alaska."

Now that's sorted, I must go out and buy a new swimming cozzie in "large". I've heard you can put on weight while you're on holiday.


*      *      *      *      *
If you are a cat lover - especially a lover of the grumpier members of the species, this is the book for you. Written by Toffee who, despite her name, is the least sweet cat you can imagine. The world according to Toffee exists to serve her and woe betide anyone who forgets it. Paperback on left, Kindle version on right.