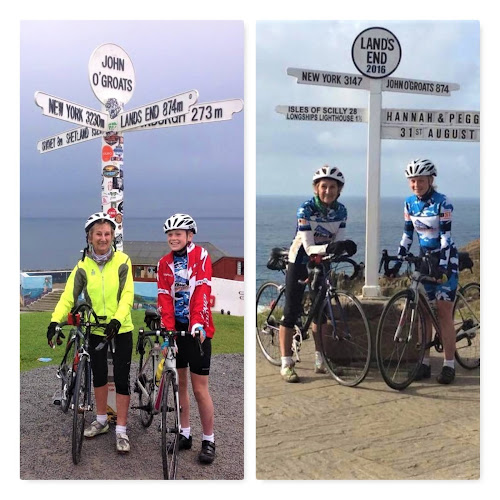 Facebook recently reminded me of a 2016 post when my sister and great-niece arrived at Land's End after cycling from John O'Groats. To my friends from other countries, these are the northernmost and southernmost points in Britain, John O'Groats in Scotland and Land's End on the tip of Cornwall.
This in turn reminded me of an article I wrote at the time for our local magazine Devon Life. I include a slightly shortened account below:
Devon Life
I HAVE a sister who puts me to shame. Peggy is 73 and still competes in triathlons and has a host of medals to prove it.
As if that isn’t enough, a couple of months ago she and her grand-daughter Hannah, my great-niece, cycled from John O Groats to Land’s End. This 73-year-old and 13-year-old took on a journey of more than a thousand miles. I know the shortest road distance between the two points is just over 800 miles but, typical of my family, they had opted to take a guide book which detailed the scenic route. They cycled up mountains and down deep valleys and did detours to take in places of interest.
Her long-suffering son Trevor (my nephew) drove the support vehicle (fancy name for a campervan) and was tearing his hair out at their sense (or rather lack) of direction.  At one point they phoned him to say they thought they had missed a turning after he had given very detailed directions and instructions about the name of the crossway with the huge signpost.
“No, we haven’t seen it,” they declared. They eventually realised they must have ridden past it.  Later in the evening after a large detour, my nephew looked at the photographs they had taken and there was a “selfie” of the two them, grinning inanely in front of that huge signpost. That lack of direction also saw them pushing their bikes through the centre of Glasgow, asking bemused Glaswegians how to get out of the city and back on track.
Thus, a distance of 800 miles quite easily becomes one of a 1,000 miles plus.
My part in the proceedings was to look after my sister’s polytunnel while she was away. As I have mentioned before, I am to gardening what Agent Orange is to jungle warfare. Even so, I don't think my mother and brother needed to have laughed quite so hard when I told them I was gardener-in-chief while Peggy was away.
I don't understand gardening and I have no affinity with plants unless they are steamed, buttered and on my plate. I have searched in vain for this fine line between insufficient watering (i.e. dead) and over-watering (i.e. dead). I’ve never found it and therefore find myself hovering between a rock and a hard place, watering-can in hand.
Day One was fine. It was sunny. The radio was on. I turned on the hose and fetched watering cans full of water. I was also charged with feeding the fish in the pond and feeding the birds. The fish seemed pleased to see me, swimming to the surface to eat up their pellets. Peggy has had trouble with herons swooping down and finding their dinner but the sky was heron-free. The birds too were happy as I replenished the feeders.
I was feeling pretty proud of myself.  This “farming” business was a piece of cake.
A few days down the line and the leaves of the cucumber plants had started to turn yellow. A quick look on the internet and a trawl of friends’ opinions wasn’t much help. The problem could have been anything from over-watering, under-watering, spider mite, blight and a deficiency of magnesium in the soil. My solution to the problem was to pick off the yellow leaves and hide them in the compost heap.
Then there were the tomato plants which soon looked decidedly droopy. I was hoping they were weighed down with the promise of an abundant crop rather than burdened by the weight of my sister's expectations. Fat chance.
By the time Peggy returned home, everything seemed OK. However, the very next day, every single one of her tomato plants turned brown, withered and died. EVERY. SINGLE. ONE. They had succumbed to an air-borne blight which completely wiped them out.
She was kind enough not to blame me for that but I couldn’t help noticing her casting worried glances towards the fishpond and bird tables.
I jokingly said: “Where’s that net? Those dead fish won’t remove themselves!” Sadly, she didn’t think I was very funny!
Before you leave:

You can follow me on: Facebook, Twitter and Instagram.  As you can see, I have far too much to say for myself. The cat lovers among you may be interested in this book written by my cat (I know,,,,) Not So Sweet Toffee. It's had really good reviews - honest!
at September 07, 2020