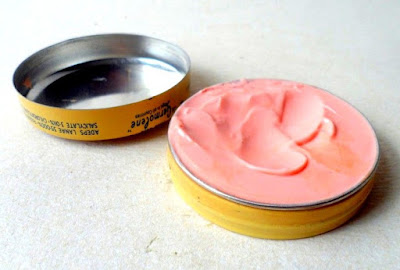 This is an original Germolene tin. The cream is still being manufactured.
I have been thinking a lot about my late parents today. My better half and I were both blessed with brilliant parents and we were reminiscing about our childhoods last night. Not that our parents were the epitome of perfect parenthood. They had their moments! But we never doubted for one second their commitment to the family or their love for us.
Our conversation reminded me of an article I wrote for Devon Life magazine. It was written a while ago now so I'm sure everyone has forgotten it  - they had probably forgotten it 10 minutes after reading it! So I'll reproduce part of it below:
Iodine and Germolene
TODAY my friend could only stay for a quick cup of coffee because one of her children was off school with a sickness bug.

Off school? The only reason my parents would let me miss school was if I had limbs amputated or was in quarantine with the Black Death.

This hardy pair had three remedies – Germolene, iodine and my father’s patent medicine. Germolene was for minor injuries. All cuts, grazes, rashes, burns and bites were cured by the liberal application of the smelly, pink antiseptic gloop.

Iodine was for more serious injuries; for example, when bones were visible. My father, a farmer and horse trainer, had the unshakeable belief that if it didn’t kill the horses, then it wouldn’t kill us. If iodine stopped a horse’s hoof from going septic, then it would certainly sort out a kid’s cut. Believe me, you do not know pain until you have had neat iodine poured over an open wound.

For colds, coughs, flu and diseases of the respiratory system, my father’s patent medicine was whisky and sugar topped up with boiling water. This remedy certainly cured my cold when I was seven; I was violently sick all night and forgot all about my runny nose. Projectile vomiting? Take a carrier bag to school with you.

No matter how serious an injury I picked up while playing outdoors – broken limbs, blinding, disembowelment by one of my brothers - it would only merit a scathing, “That’s nothing!” from my mother as I was shown the door. If both your feet were facing the right way, there was obviously nothing wrong with you.

The attitude was that if you ignored an illness, it would go away. If you fought it off without outside interference, you would end up tougher. If you allowed a bug to take its course, you would be immune to it next time round. It’s an attitude that has stayed with me into adulthood. My reaction to any affliction that strikes me is, “That’s nothing!” and I carry on.

The dearly beloved has a similar attitude. The day after he had taken the tops off two of his fingers and scraped the skin almost to the bone after a nasty accident with an electric planer (don't ask...), he was up on the roof of his factory workshop to replace tiles, protecting his mangled hand by wrapping it in a polythene bag with string around the wrist.

Instead of berating him with wifely concern, I nodded approvingly. I only wished I'd had a bottle of iodine with me.
*  *  *  *  *  *  *
Looking for a Christmas present for a cat lover? Here's one written by a cat who describes herself as a "prawn aficionado, diva, grumpy and rude! And she is definitely all of those things but very funny with it. Have a look here: http://bit.ly/wordsbytoffee
* * * * * * *