The Dummy's Guide to Gardening 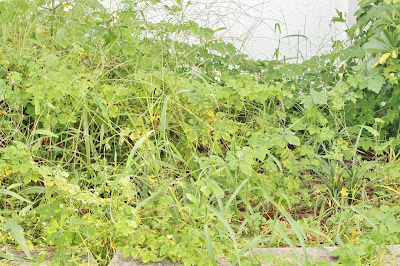 THERE we were in the pub having a conversation about gardening and the relative merits of various lawn mowers and strimmers.

"What I need in my garden," said the Dearly Beloved, "is a goat."

This would be mildly amusing if it weren't so true.

I know many people who leave a patch for wildlife, but not usually seven-eighths of their whole garden. In any case, it's gone beyond being suitable for wildlife. I know of no indigenous British species that would not get lost in our garden.

We may, for all I know, have an entire alien ecosystem nestling under the dandelions, brambles and long grass. We may be nurturing a new species of rabbit, capybara or pygmy hippo.

Elephants could have escaped from Paignton Zoo and taken up residence in our garden. I would have no way of knowing apart from the tell-tale sign of bark stripped from the buddleia.

You may be wondering why only seven-eighths has gone to pot (I'm not talking illegal plants here, although sitting out of a balmy evening and breathing in deeply might help to reduce my stress levels). The final eighth of the garden is MY responsibility. I mow and tend flowerbeds; the Dearly Beloved strims and occasionally tries to tackle the weeds on paths and the patio. Unfortunately, I usually have to take over this task as, left to his own devices, his way of weeding is to chuck weedkiller about like he's a GI clearing swathes of Vietnam with Agent Orange. I prefer a more eco-friendly approach.

So the lawn is mowed and the flowerbeds are, well, let's be honest here, kind of passable. The rest is undergrowth of Amazonian rainforest proportions.

All that - nearly - changed yesterday. I mowed the lawn and had just finished as the DB returned home. He had the brilliant idea of using my lovely little electric mower on the overgrown bank. I was dubious but didn't want to put him off when his brain was in gardening mode.

He set off at a lick, disturbed only by the sound of Japanese soldiers who didn't know the war was over, taking cover elsewhere in the garden.

Half an hour later the electric went as I was cooking. He poked his head around the door to tell me there'd been some kind of cable-related catastrophe. "Don't worry," he says, "I can fix it!"

Fixing it, apparently, means re-setting the trip, taking a shower and then going off to the pub for a couple of pints before the European Cup Final starts at 8pm.

So that was the end of his gardening yesterday.

This morning he had pressing business helping one of our friends who was putting in a new conservatory. Friend + brother-in-law turned up at 9am. Friend informed DB that he and brother-in-law had already started the work. Unfortunately, they had put in one window frame back to front. Oh God...

So this happy trio - or The Fun Boy Three as I like to call them - have set off for the other end of the village to rectify matters.

The conservatory was bought second-hand and the DB helped dismantle and collect it. The Fun Boy Three were then joined by a fourth member. He has since emigrated to France.

I wish I'd thought of that.