My Life With Kale 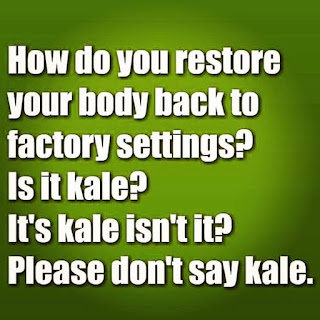 HE doesn't say them often, but I love it when the better half utters those three little words guaranteed to warm a woman's heart: "Let's eat out."

I put on my best frock and off we go to one of Devon's wonderful pubs or restaurants. Invariably these days, there it is on the menu. Kale. It's everywhere you look, on every cookery programme, in all the top chefs' recipe books and practically every Sunday supplement extols its virtues .

Not that I have anything against kale. I like kale. I was brought up on kale. It grew like a weed and was one of the things that we fed to the cows on our farm in the winter. Then my mother boiled it to death and fed it to us. If there was any left over, it went into bubble and squeak.

But now it's not so much a food as a fashion accessory. Kale is cool.

In restaurants it is tarted up and served with a flourish. No waiter has ever said to me: "Eat it up, it'll give you curly hair," like my mother used to say. Come to think of it, there was a variety of food she claimed would give you curly hair, from crusts on your bread to liver. I swallowed the line along with the kale, crusts and liver and have to report that left to its own devices my hair is straight as a pound of candles.

On one menu I spotted kale served as a salad with pancetta, parmesan and lemon juice. I gave that a miss. Raw kale, I thought, was a step too far until I was further into the whole gussied up kale experience. But then I really enjoyed a dish that included braised kale with bacon and cider so I thought I would look on the internet for kale inspiration. What an eye-opener that was.

There was potato, kale and fennel hash, sauted kale with broccoli and feta (kale AND broccoli? I feel healthier just reading that) and curried kale with coconut. Even as a reborn kale gourmet I thought currying it sounded a bit too far out - but I might give it a go one day.

I wish my mother had known that boiling wasn’t the only option. You can steam it, cream it, butter it and braise it.

I even came across a video: How to Make Wilted Kale with Bacon and Vinegar and watched a woman doing exactly what it said, wilting kale and adding bacon and vinegar. I learnt nothing and that was one minute and thirty-seven seconds of my life I am never going to get back.

By now I was really into the whole kale experience. In fact, this column should be entitled How I Fell In Love With Kale All Over Again. I read all about its history and the different varieties, from curly kale to cavolo nero and Russian Red.  I learned that until the end of the Middle Ages kale was one of the most common green vegetables in Europe. During the Second World War, we Brits were urged to grow more kale by the Dig For Victory campaign.

I found out that is incredibly nutritious. It contains beta-carotene and the antioxidants lutein and zeaxanthin—which are associated with eye health—as well as potassium, vitamin A, vitamin C, iron, and calcium. There are two grams of protein and 15 per cent of the minimum daily recommended amount of fibre in every average serving – although, in an oversight I cannot explain, no website mentioned it being conducive to curly hair.

Not everyone has bought into the kale experience. A lot of people I have talked to about kale (yes, my conversation is that exciting) have shuddered, recalling childhoods when they were forced to eat it because it was so good for them. They turned up their noses, saying the taste was too strong and the texture sometimes too woody. I, as a kale convert, tried to explain it was all in the cooking and they should be more adventurous.  I could tell not all of them were convinced.

A couple of comments on the internet alluded to the fact that the vegetable is now achingly trendy. As one person said, tongue in cheek: "Eighty per cent of the people who buy kale throw it in the bin as soon as they've taken a photo" and another "This kale and beetroot juice tastes like I'm going to alert everyone to the fact I'm drinking it." But I think they've missed the point.

Every Sunday I cook a family roast dinner. There's usually about half a dozen of us but occasionally a random nephew or niece will phone and ask it it's OK to come to dinner and bring along boyfriend, girlfriend, someone they met in a  pub… My table only seats six but with the addition of garden chairs we can squeeze in quite a few more.

It has to be roast. The better half has a roast on Sunday every week of the year. And I mean every week. We can be in the middle of a heatwave and I am still in the kitchen, roasting while roasting. I'm pretty good at them, if I do say so myself, but I rarely deviate from the norm - a joint, roast potatoes and lots of vegetables. But this Sunday I'm going to try braised kale with bacon and cider in an effort to up my game. They'd better be impressed. If not, I'll tell them they must eat it up or they’ll never have curly hair.
Before you leave:You can follow me on: Facebook, Twitter, Instagram, and Pinterest. As you can see, I have far too much to say for myself.
at November 28, 2016