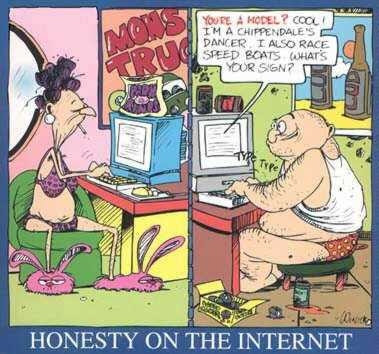 I HAVE never joined an online dating site but if The Man ever threatens to sell me for three camels, a box of couscous and a tagine, I might consider it.

I would be wary, though, not wanting to end up with a man whose idea of fun is watching back-to-back episodes of How It's Made (oh no, that IS The Man).

I have friends (male and female) who have negotiated the hazards of online dating so I have used their experience to draw up a few rules for you to avoid the escaped convicts, the sexual deviants and the terminally dull.

Beware of  how they describe themselves:
Then there’s that photograph. If it’s black and white, it was probably taken when men were making fire by rubbing two sticks together. These days he or she spends their time sipping weak camomile tea and watching Bargain Hunt on TV.

Generally speaking, try to imagine someone about 10 years older, a stone heavier and three degrees uglier than the picture provided – because they will have sent in an old, flattering photograph.
If the photograph is of a man wearing a hat, he’s bald. If he’s standing beside his motorbike, he’s having a mid-life crisis.

If it’s a woman cuddling a cat (this would be me!) then she’s borderline sociopathic.

Beware, too, of phrases like “I’m a man’s man”. This means that once he’s got you hooked he’ll expect his dinner on the table every night on the dot of 7pm and you’ll spend your nights alone while he’s in the pub with his mates burping the national anthem.

Just as bad is the woman who says she’s “a girly girl”. This is shorthand for as shallow as a saucer of milk. She judges everyone on how they look and knows every beauty-enhancing procedure down to the last staple...but has no idea who Theresa May or Donald Trump are.

Finally, if they ever use the word “discretion”, they’re married.