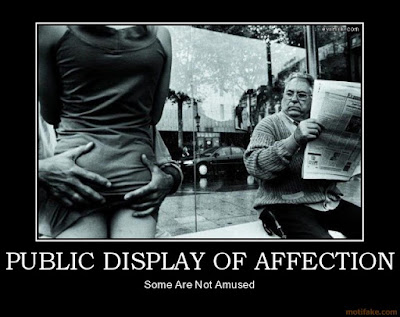 LOOK, I am a Devon maid through and through, from the top of my wellies to the bottom of my scrumpy bottle. As such there as certain things that make me cringe and endeavour to crawl into a very small hole and hide away even though small holes and I are not exactly compatible.

We've reached July and there have been periods when the sun has actually shone. This has been wonderful for the locals and those tourists who are clever enough to see that Devon is God's own county.
But…but... the trouble is when you get lots of people out on the street you see the worst of one of  my bêtes noire - PDAs, or Public Displays of Affection.
I don't mind people holding hands. In fact, the better half and I have been known to hold hands in public. Admittedly, only when we go on the Tube in London and I hang on to  him for dear life because I'm afraid of getting lost. And I think we held hands in the street once in 1980 - the year we met and new love had addled our brains.
On the whole though, we keep a respectable distance between us, although, no matter how much he’d like it, he doesn’t require me to walk ten paces behind him.
I don't even mind a quick kiss - at airports, railway stations and between grans and their grandchildren. It's the wholescale, full-on, should be in their own room type of PDAs I object to.
I was in Exeter the other day - a beautiful city with fine cathedral and historic buildings. But the spirituality of the Cathedral green was rather marred for me by a young couple whose PDA was even worrying the pigeons; hands everywhere and lips locked.  I averted my eyes, as I noticed most other people were doing.
Eating lunch, a couple were anchored at the lips - and if it wasn't for the expression on their faces I would have thought he was trying to resuscitate her with mouth-to-mouth because a section of her Four Cheese Pizza had gone the wrong way. I don’t know when they found the time to eat.
Then in the car park was another couple - old enough to know better - who were clinging to each other for dear life and kissing more passionately than Kate Winslet and Leonardo Di Caprio as Jack and Rose in Titanic. At least Jack and Rose had the excuse that the darn ship was sinking and death was a distinct possibility. As for car park couple, obviously not married, I thought…at least, not to each other.
Am I alone in thinking like this? Is it because I was brought up in a family that although extremely close was not particularly physically demonstrative? We kissed our parents goodnight and we might submit to a peck on the cheek if we hadn’t seen each other for months. Apart from that it was a very manly handshake or brief hug.
Give me a ring in the middle of the night and tell me your car's broken down in Birmingham and I'll be there. Approach me with arms open wide and lips puckered when I only saw you last week and I go stiffer than a reinforced poker.
Not every country is as laid back about PDAs as Britain. We've read stories about the Middle East where tourists have been sent to jail for hugging or kissing in public. In China, bizarrely, only members of the same sex are allowed to hold hands or dance together in public. At one time it was the law that couples had to walk three feet apart while out in public. Good idea.
In Japan, families bow to each other when saying hello or goodbye. Respect and formality; now that's just the type custom I would like to see here!