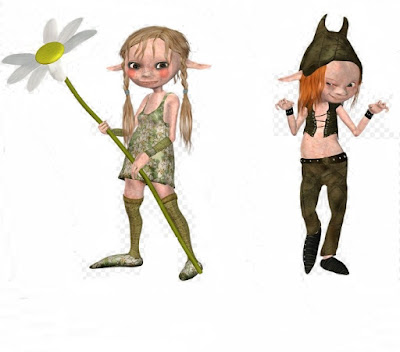 I AM feeling a bit pixilated. I don’t mean a photograph of me has broken out into fuzzy squares – although many people would consider that an improvement – but I have been touched by the pixies and am feeling somewhat confused and bemused – no change there then.

I suppose I ought, in the interests of accuracy, to point out the slightly different spellings – I am pixilated whereas my photograph would be pixelated. (I'm sorry, once a sub-editor, always a sub-editor.)

I'm not sure if my non-British friends know what pixies are. They are little sprites that live in Devon and Cornwall in the South West of England and they get up to all kinds of mischievous s activities.

I was brought up on stories about the Dartmoor pixies. I was told to be careful because pixies disguise themselves and try to lure children away from home. That was one way, I suppose, of stopping your child going off with a stranger. Of course it’s a “fact” that pixies love singing and dancing and ride about on Dartmoor ponies.

They are often helpful but sometimes mischievous, and can confuse you in the blink of an eye.  If you don’t know whether you are coming or going, if you start feeling dizzy and strange and feel compelled to wander about aimlessly, you could well have been touched by the pixies.  But fear not, the antidote to being pixie-led is to turn your coat inside-out. That’ll do it.

The better half often claims to be pixie-led, usually when he’s late home from the pub. If only he remembered to turn his coat inside-out.