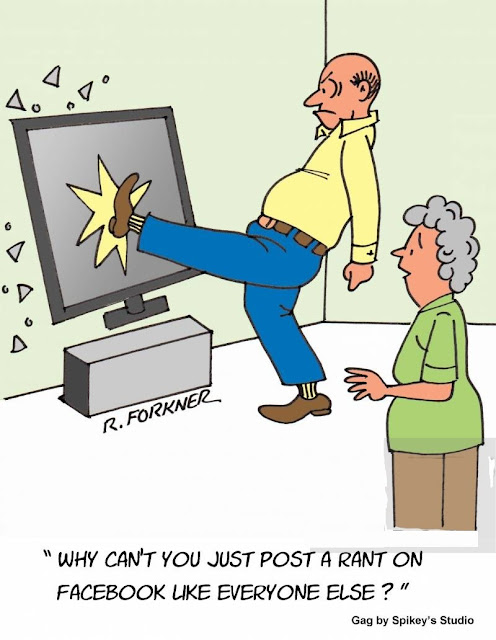 The dearly beloved is not known for his reticence.  He is pretty laid back and easy to live with on the whole but there is a long list of things that make him cross, from politics to celebrities and football to fashion (please don't mention ripped jeans within his hearing).  Modern life in general tends to enrage him and he is not backward in coming forward, as my mother used to say.

Coronavirus is, of course, saturating news coverage these days. He has no faith in anyone making the decisions.
"They are like effing school governors trying to run a tuck shop," he rants.  (I didn't dare tell him that school tuck shops probably only exist at Hogwarts these days, because Harry Potter is another thing he hates).

Then there was the rant about a gambling website. Every Saturday he spends the grand total of £2 on something called the Scoop6. It's a bit like a lottery. You have to get all six winners in six selected races - practically impossible but it's a lot of money if you win. He always logs on expectantly every Saturday afternoon thinking that the six nags he has chosen have all romped home ahead of the field. Sadly, two hours after the races are over, a significant proportion of them are still running!

This Saturday he was up early to pick out his horses. He logged on to the site and the rants began. It seems he was a bit early and not everything had yet been posted. Sarcasm dripped from him as he moaned: "Oh no, they can't get it all done before 8am - too much effing trouble for them," was the only comment fit repeating for my readers of a delicate disposition.

The sugar tax in a bid to cut down on childhood obesity was another issue that caught his eye. "Why should I pay tax on Coca Cola just because there's some stupid woman up the road drip-feeding it to her kids?"
Then there are his views on global warming, the "snowflake" generation, the education system, pathetic sitcoms on TV, the fact that manufacturers are making clothes smaller these days (yes, dear...), sport, other drivers and the internet, to name but a few.
He is so bad I have named him Sir Rantsalot. Not to his face obviously. Ha-ha.
The cat and I are used to his, shall we call them "strongly-held views?" and try to block our ears to them. We have sidled off to the other side of the house, his rants gradually fading to a distant rumble.